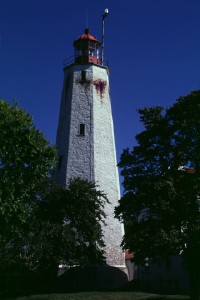 Look at a map of the greater New York City area and -- about ten miles south of Manhattan -- you will see Sandy Hook, a narrow spit of New Jersey that is part of the Gateway National Recreation Area and home to the Sandy Hook Lighthouse.

The Sandy Hook Light is the oldest standing lighthouse in the United States. It also owns the distinction of being the country's first octagonal lighthouse.

The octagonal design, which became very popular in the 19th century, was created to ensure a more durable structure that would be better able to weather severe storms. Near the tower is a brick, three-story keeper's house, complete with veranda and two chimneys.

In the early 19th century, the lighthouse employed a large whale-oil lamp that had four dozen wicks. It was eventually modernized in 1856, when a Fresnel lens and state-of-the-art lamp replaced the whale-oil light. Interestingly, the classic Fresnel lens remains in place today and radiates a continuous beam of light that is visible well into New York City.

The Sandy Hook Light has its share of ghost stories. One legend has it that builders found a skeleton behind a makeshift brick wall!

In the early 21st century, as in the mid-18th century, all a ship's captain has to do on final approach to New York is steer to the north of the Sandy Hook Light and he or she will reach the city's safe waters.

For well over two centuries, a light has burned every night on the top of this classic 85-foot stone tower, a remarkable testament to the well-built soundness of this Colonial lighthouse, as well as to the enduring importance of these navigational aids.