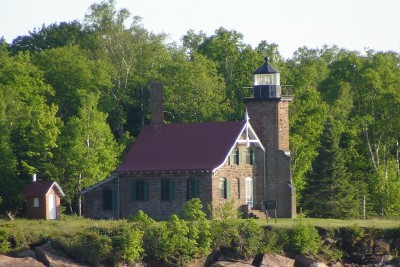 With its thick walls of mortar and country rock, the Sand Island lighthouse will likely be standing a century from now. See more lighthouse pictures.
©2007 Mark Taylor

The Sand Island lighthouse is just one of many lights that were built to guide vessels south along the busy shipping channel to Duluth, Minnesota.

Bear Island. Rocky Island. Oak Island. Outer Island. Cat Island. Stockton Island. Sand Island. Together this loosely scattered family of 22 timbered, rocky islands in southern Lake Superior are known as the Apostle Islands. They are among the most cherished natural areas in all of northern Wisconsin.

Of these, none are more lovely than the Sand Island Lighthouse, which was constructed in 1881. The sandstone tower exhibits a light 52 feet above Lake Superior.

Like all the other lighthouses on the Apostle Islands, the light is accessible by boat or ferry and is open to the public. Together these handsome, well-built, freshwater lighthouses form the world's most extensive outdoor lighthouse museum.

Today the Apostle Islands are collectively protected as the Apostle Islands National Seashore (AINS). Managed by the National Park Service, the AINS protects a pristine vignette of the north country as it once was, and of how important lighthouses remain to recreational and commercial traffic on the Great Lakes.

Just a one-hour drive from Duluth, the breathtaking islands offer visitors not only the chance to recreate in some beautiful wild country but also the opportunity to view some of the finest lighthouses ever constructed on the Great Lakes.