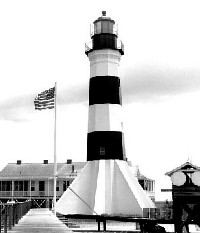 The large side supports of the Sabine Pass tower hold it erect despite the marshy grounds that surround it. See more lighthouse pictures.
©2007 US Coast Guard

The coast of Louisiana is quite different from coasts further to the east and west. It is a much more complicated coastline, particularly around the delta of the Mississippi River, with myriad bays, channels, islands, peninsulas, river outlets, forested bayous, and open swamps. This made construction of the Sabine Pass lighthouse quite an engineering feat.

In this region the word "pass" is used by locals to signify a natural, fairly deep water route through substantial shipping obstacles, such as shoals, sandbars, and low water. Two of the most important passes are near the furthest delta of the Mississippi River.

Although the early French settlers established primitive beacons as early as 1721, the first substantial lighthouses were not built until much later. One of those was the light at Sabine Pass, which is located near the mouth of the Sabine River at the border of Louisiana and Texas.

This light was designed and built by Army engineer Danville Leadbetter. An 1836 graduate of the U.S. Military Academy, Leadbetter was, along with George Meade (both later active as officers in the Civil War), one of the most eminent of the early lighthouse builders.

Leadbetter's design for the Sabine Pass lighthouse included enormous buttresses to give the structure better support in the soft, perpetually wet ground. Although a fierce hurricane in 1886 swept away the keeper's house, the tower stood firm. That it still remains a century and a half after it was raised says something about the ability of its creator.

The Sabine Pass lighthouse was active until 1952, when it was decommissioned. Although it is located on private land, the lighthouse can be viewed by boat from offshore tours arranged at nearby Port Arthur.

In recent years there has been a local movement to purchase the area around the Sabine Pass lighthouse. Folks want to create a Louisiana state park there and build a causeway from the mainland out to the vicinity of the lighthouse.