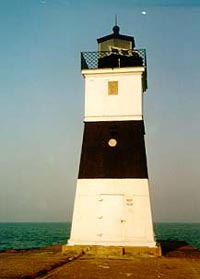 Although most people probably don't think of Pennsylvania as a state requiring a lighthouse, the truth is that the Keystone State has a significant corner of coastline along Lake Erie where the Presque Isle Lighthouse is quite helpful.

In fact, on the long windswept coast between Cleveland, Ohio, and Buffalo, New York, the only other major port town on the lake is Erie, Pennsylvania.

Presque Isle, which in French means "almost an island," is actually a long peninsula that curves from the south like a protective arm around the port of Erie. In 1813, Presque Isle witnessed a unique moment in American history, for it was in the adjacent port of Erie that Oliver Hazard Perry raised a fleet of U.S. battleships that went on to beat the British in the Battle of Lake Erie.

It was during this battle that the intrepid Perry uttered the famous words: "We have met the enemy and they are ours."

The original Presque Isle Lighthouse, which was actually located on the sand beach across from Presque Isle, was raised in 1819. The first tower was replaced in 1867. Circular in shape, it was built of sizable blocks of native sandstone. This light operated through much of the 19th century.

Its replacement, the current Presque Isle Lighthouse, was built at the end of seven-mile-long Presque Isle in 1873. The 68-foot tower was outfitted with a Fresnel lens and was given a fixed white light. All those approaching the port of Erie, Pennsylvania, can count on this light.

A keeper's residence was built next to the tower, and a 1.5-mile road was created to connect the lighthouse with a boathouse in Misery Bay. Folks today take the leisurely stroll down Sidewalk Trail.

Despite the popularity of the beacon today, the Presque Isle Lighthouse was once described as "the loneliest place on earth" by Charles Waldo, the first keeper of the station. On July 12, 1873, he wrote: "This is a new station and a light will be exhibited for the first time tonight."

Later, he added a sad addendum: "There was one visitor."