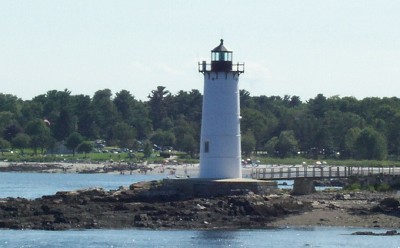 The green, flashing light of the Portsmouth Harbor lighthouse still helps mariners find their way near the entrance of the Piscataqua River. See more pictures of lighthouses.
©2007 Jaye Elle

Legend has it that none other than President George Washington came to New Hampshire to visit the Portsmouth Harbor lighthouse in 1789. He found its general maintenance to be lacking and arranged for the lighthouse keeper to find another line of work.

By that time the lighthouse, located in New Castle at the entrance of the Piscataqua River, had been in operation for 18 years. During the Revolutionary War, it helped guide the local New England privateers who raided British shipping and harassed the king's Navy vessels.

Local history also has it that, during the war, folk hero Paul Revere and local militiamen captured the fort in Portsmouth Harbor with the help of the lighthouse keeper.

In its early days, the light was quite primitive -- little more than a lantern hung from a flag mast at the harbor fort. By 1800 the old lighthouse was in a state of ruin, and a new one was planned.

Four years later the original tower was replaced with a new one that rose from a foundation of granite blocks. A Navy report in 1838 stated that the Portsmouth Harbor lighthouse was in "fine order."

Only 28 years later, in 1877, the U.S. Lighthouse Service replaced this 80-foot tower with a 48-foot cylindrical iron tower. That tower, which emits a fixed green light, remains today and is said to be visible from about 12 miles out.

Although the Portsmouth Harbor lighthouse is currently part of a U.S. Coast Guard base, it is open regularly for public visitation. The lighthouse is still on the grounds of the old Colonial fort that it once served.

Those who pay a visit to Portsmouth Harbor lighthouse can join the ranks of its other visitors through the years, which include New Hampshire native son Daniel Webster and the widely wandering Henry David Thoreau.