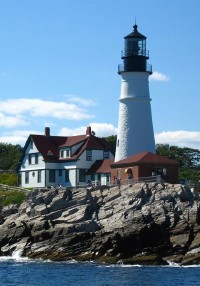 The shoreline around Portland Head Light alternates between rugged rock formations and beaches of smooth, sorted cobblestorne. Portland Head is one of the most frequently visited lighthouses in America. See more lighthouse images.
©2007 Tom Holland

Portland Head Lighthouse has marked the entrance to the busy harbor of Portland since 1791. It is one of the most beautiful lighthouses in New England -- if not the entire country -- and is one of the major tourist attractions along the Maine coast.

Both the keeper's house and the 80-foot cylindrical tower sit upon a massive point of weathered rock near the entrance to Portland Harbor. The picturesque scene -- wild surf, broken rock, immaculate lighthouse -- is a favorite of marine oil painters and landscape photographers.

The Portland Head Lighthouse holds the distinction of having been dedicated by the Marquis de Lafayette, the distinguished Revolutionary War general from France. It was the first lighthouse to have been built by the United States Government (as opposed to a local Colonial authority).

The bill setting out its establishment was passed by the new United States Congress on August 7, 1789. Then President George Washington instructed his secretary of the treasury, Alexander Hamilton, to finish completing what had only been modestly begun by the old Massachusetts colony.

The total cost of constructing the new lighthouse was $3,000, a regal sum for that time period.

In 1855 the tower received a modern Fresnel lens, as well as a masonry lining and an interior circular stairway made from wrought iron. In 1885, the tower was raised 20 feet, and in 1891 the keeper's house was enlarged and a garage and oil house were added. Other than that, the lighthouse looks pretty much the same as it did when General Lafayette came up for the dedication more than two centuries ago.

Maine has more than 2,000 miles of coastline crammed into the various bays, inlets, coves, islands, islets, and channels along its eastern shore, and there are more than 60 lighthouses from north to south.

Of all those lighthouses, though, none are more lovely, or more easily seen, than Portland Head. This is the light that inspired Henry Wadsworth Longfellow to write his lovely poem "The Lighthouse."

The powerful beacon is said to be visible for up to 25 miles. Visitors today will find a wonderful lighthouse museum in the old keeper's residence.