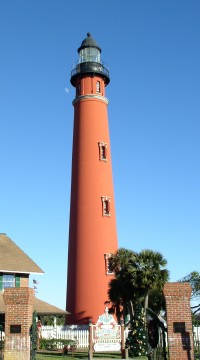 Only the physically fit can climb all of this tower's stairs. Ponce de Leon Inlet Lighthouse is only 18 feet shorter than Cape Hatteras Lighthouse, which is the tallest in the United States. See more pictures of lighthouses.
©2007 Micah Maziar

South of historic Saint Augustine, Florida, and north of Cape Canaveral, there is a long, low stretch of subtropical forests and open, sandy beaches. Although the coast appears cleaner from a navigational standpoint than the rocky coast of, for example, New England, maritime hazards still abound, making Ponce de Leon Inlet Lighthouse a necessity.

For one thing, numerous offshore sand shoals, or sandbars, pose a real threat to vessels as they ply the waters parallel to the coast. For another, the coast is so flat that few opportunities exist to construct lighthouses from any natural feature resembling a headland or promontory.

For this reason, lighthouse construction came both late and light to the region, despite considerable maritime activity dating back to Colonial times.

It was during the administration of President Andrew Jackson, in 1834, that the first lighthouse was constructed at Mosquito Inlet, Florida (as it was then referred to). This primitive structure was located just south of what is today known as Daytona Beach.

The Seminole Wars erupted shortly thereafter, and the first Ponce de Leon Inlet lighthouse -- called the Mosquito Inlet Lighthouse -- fell into a state of disrepair. Within two years, erosion became so severe that the tower fell over into the sand dunes.

Half a century later, the United States Lighthouse Board returned to the area and busily set about planning a new lighthouse to mark the shallow waters near the inlet. After all, a nearly 100-mile stretch of coast between Saint Augustine and Cape Canaveral had only one other light.

Funds for the construction of a permanent light at Ponce de Leon Inlet were appropriated by the United States Congress in 1882, and the tower was ultimately completed in 1887. The tower stood 175 feet above ground level and was fitted with a first-order Fresnel lens.

Today, thousands of Florida vacationers flock to the inlet to see the historic light, which is the second tallest brick tower in the United States.