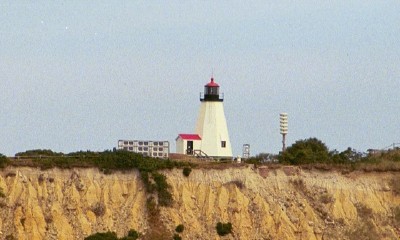 The first Plymouth Light was constructed more than a decade before the Declaration of Independence was signed in Philadelphia. The striking pyramidal shape of the light at Plymouth, a very sturdy form of lighthouse design, can be seen here. See more pictures of lighthouses.
©2007 Mike Carey

The historic Plymouth Lighthouse occupies a thumblike projection of land near the entrance of Plymouth Harbor, about 30 miles south of Boston. Although this flat point of land, called the Gurnet by local residents, is today crowded with fine seaside homes, it was once a lonely, desolate peninsula far from human habitation.

The first light was built in 1769, nearly 150 years after the Pilgrims, sailing from England aboard the Mayflower, initially settled around Plymouth Harbor. The original lighthouse consisted of two beacons, one at either end of a small building. It had the unusual distinction of having been hit by a British cannonball during the American Revolution, although the light was miraculously undisturbed.

After the Revolution was over, the lighthouse was ceded from Massachusetts to the new federal government. Its tradition of having two lights at the point persisted into the 19th century in order to avoid confusion with other nearby lights.

At least two replace­ment structures also contained a pair of beacons. The last two-beacon edifice was raised in 1843, although one of the twin

towers was later taken down in 1924. Its 39-foot mate still remains, flashing every ­30 seconds.

Clearly visible from tour boats in Plymouth Bay, which remains a popular vacation site because of its Colonial importance, the Plymouth Lighthouse is situated on high sandy bluffs.

It is a wonderful place to take the family and reflect upon the historical importance of Plymouth, where the first pioneering vessels from England made landfall in New England, where the concept of freedom took a step forward, and where a pair of faithful lights welcomed mariners in from the sea.