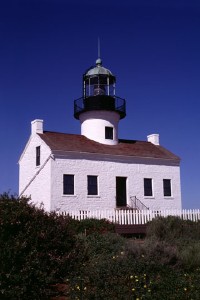 This close-up view of the light room at the top of the Old Point Loma tower reveals the sturdy construction that helped it withstand winter storms. See more lighthouse pictures.
©2007 Joyce and Ainsley Dixon

Just 12 miles north of the border with Mexico, on a sandy peninsula of land that curves like a protective arm around San Diego Harbor, is one of the most scenic lighthouses in the United States: Old Point Loma lighthouse.

Located on the grounds of Cabrillo National Monument, which commemorates the 1542 exploratory voyage of Juan Rodriguez Cabrillo, the lighthouse stands out prominently at the top of a salience overlooking San Diego.

Long before a lighthouse was built on the site, colonial Spanish regularly built signal fires on Point Loma to help guide their vessels into the safety of San Diego Harbor.

The present lighthouse was constructed in the years following California state­hood (1851-1854). During that time Californians were anxious both to solidify an American presence on the historically Spanish coast and to facil­itate active commercial passage into San Diego Harbor.

Once authorized, the Old Point Loma lighthouse was built with sandstone bricks chipped by masons from the local hillsides. The light tower was raised directly from the dark shingled roof of a compact, one-story structure, which was painted white to aid its visibility.

Topped with a Fresnel lens, the Old Point Loma lighthouse remained active until 1891, when it was closed. Although the lighthouse was nearly 500 feet above the level of the sea, it was also well up into the fog zone, and hence its light was frequently obscured. The lighthouse was eventually replaced with a skeleton tower at a lower, fog-free elevation.

Visitors to the Old Point Loma lighthouse today are able to spot migrating gray whales far out to sea. The view from Old Point Loma has been called one of the three best harbor views in the world.