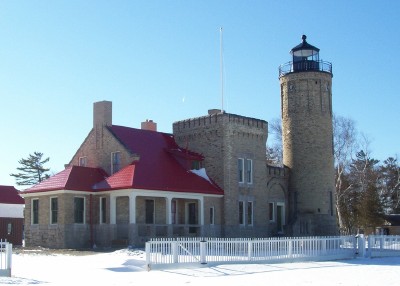 Rising with castle-like walls and turrets, the massive brick Old Mackinac Point lighthouse is one of the more solid and imposing in the Great Lakes region. See more lighthouse pictures.
©2007 Eric Rae

Northern Michigan and the Upper Peninsula offer some of the most fascinating country in the Great Lakes region, both in terms of human history and natural history. This is the historic homeland of the Chippewa Indians, who paddled over three lakes -- Huron, Superior, and Michigan -- in birch-bark canoes. It is also the site of Old Mackinac Point lighthouse -- the first substantial lighthouse on the south shores of the Straits of Mackinac.

In lieu of lighthouses, the Chippewa used wood-burning fires along the lake shorelines. As early as 1616, French explorers came into this wild, little known area. These adventurers included famed Jesuit priest Father Marquette. The Father Marquette National Memorial and Museum is located on the Upper Peninsula just above the Straits of Mackinac.

Since the beginning of water-borne travel on the Great Lakes, the Straits of Mackinac have posed special challenges to mariners. At the straits, the waters of Lake Michigan and Lake Huron mix and intermingle through a narrow, six-mile-wide channel. The result is sometimes dangerous currents that form in an area known for its submerged rock reefs, quick-developing fogs, and violent storms.

In 1892 the first substantial lighthouse was built at Mackinaw City on the south shores of the Straits of Mackinac. The 40-foot light tower, built of gray masonry, rose near a two-story lighthouse keeper's residence.

The sturdy stone residence, with a pitched red roof and three chimneys (winters are cold in the far north), looked more like a small castle than

The construction of the bridge over the Mackinac Straits in 1957 made the Old Mackinac Point lighthouse unnecessary, and so it was decommissioned. Today the area is part of a modest city park overlooking the historic Straits of Mackinac.