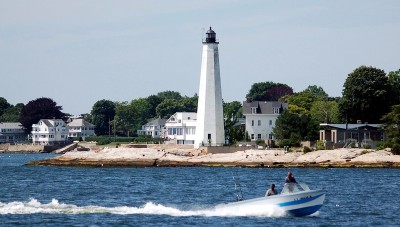 Rising just at water's edge, the lighthouse at New London is one of the taller lights in New England. From base to light it rises about eight stories above ground level. See more pictures of lighthouses.
©2007 Rich Moffitt

Thomas Jefferson was just a 17-year-old teenager entering college, and 28-year-old George Washington, recently married, was settling into his role of gentleman farmer, when the first lighthouse was raised at New London, Connecticut, in 1760.

Financed by a public lottery, the original lighthouse was erected on the heavily forested southwestern bank of the Thames River, where the river empties into the northern waters of Long Island Sound. Here its light could be plainly seen by passing vessels as a warning to captains that if they sailed further, they would miss the Thames and the port of New London.

Thirty years later, after the Revolution, control of the lighthouse was taken over by the federal government. Eventually, in 1801, the Colonial lighthouse was replaced by a massive octagonal tower that rose 80 feet above the surrounding waters.

Attached to it was a lovely three-story home made of the same red brick as the light tower. In 1855 a state-of-the-art Fresnel lens was installed in the tower. The 1801 tower remains today, although it is now privately owned and closed to the visiting public.

Trident nuclear submarines, based at New London Naval Submarine Base in nearby Groton, now churn through the same Thames River waters that were once familiar to Atlantic whalers and cod fishermen in the Colonial era.

Much about the world has changed since the days of Jefferson and Washington, but one thing has remained constant -- the need for coastal lighthouses like the old tower at New London to protect the lives of recreational, commercial, and even naval mariners.