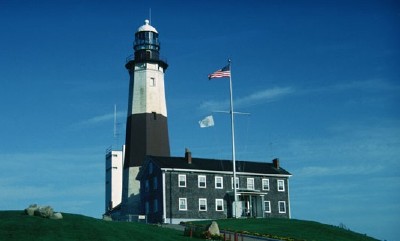 Morning light illuminates the massive octagonal light tower at Montauk Point. In the foreground is the three-story lighthouse keeper's residence, with a decommissioned ship's mast near the porch. See more pictures of lighthouses.
©2007 Joyce and Ainsley Dixon

East of Fire Island, east of the Hamptons, and east of every other geographic point on Long Island is Montauk Point -- and the Montauk Point Lighthouse.

There, more than 100 miles from New York City, is one of the first points of land mariners have historically observed as they sailed to that great capital of maritime commerce.

Ordered by President George Washington and designed and built in 1797 by preeminent architect John McComb, the 78-foot tower at Montauk Point rises from a grassy headland to overlook the gray-blue Atlantic. From there, with saltwater on two sides of the windblown hill, visitors can observe wheeling gulls, passing whales, and the constant stream of oceangoing traffic heading in and out of New York City.

Given its location on tall bluffs above the surf line, Montauk Point is one of the most scenic lighthouses in North America.

The octagonal tower that McComb constructed was built of sandstone blocks quarried on Long Island. Together with the adjacent two-story lighthouse keeper's residence, the Montauk Point light station cost more than $22,000, a sizeable fortune at the time.

Given the importance of foreign trade, however, particularly with France, it was a sound investment for the early republic. The station's light, standing on top of a tower that itself rests on an 80-foot bluff, beams out from a height of nearly 170 feet, which makes it visible far out to sea.

Today the Montauk Point Light sees over 100,000 visitors each year, partly a result of the fascinating Montauk Point Lighthouse Museum. The museum displays a comprehensive collection of lighthouse lamps and lenses, as well as an interactive diorama designed to acquaint children with the function and importance of lighthouses throughout U.S. history.