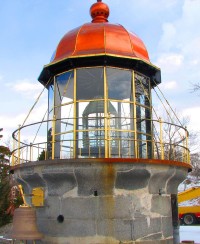 Twenty miles southeast of Boston is the small community of Cohasset, which takes its name from a Native American word. Just offshore from Cohasset is one of the most dangerous shoals along the Massachusetts coast -- the dreaded Minot's Ledge, which is home to Minot's Ledge Lighthouse.

Part of the problem with Minot's Ledge is its specific location. In the past, vessels sailing toward Boston Harbor traditionally took their directions from the light at Provincetown and continued west on a steady compass heading. If, however, the ship was just a little bit off as it approached the coast south of Boston, drifting slightly to the south, it would unexpectedly ground and splinter timber on Minot's Ledge.

If caught in a storm, if there were not enough lifeboats, or if the ship simply broke apart too quickly, a catastrophe and loss of life would ensue. Records show that literally dozens of ships wrecked on Minot's Ledge.

For decades, the construction of a lighthouse on the open sea at Minot's Ledge was considered an engineering impossibility. In 1847, however, a young engineer developed a plan to drive pilings deep into the bottom of the sea. On those pilings an iron structure would rise, and on top of that would be a small keeper's cabin and a tower holding a lantern.

It was thought that the open-framed tower would offer less resistance to the wind and would thus be better able to survive a strong storm or hurricane.

The Minot's Ledge tower entered service on January 1, 1850, after a construction period of three years. The first keeper assigned to the tower, a man named Isaac Dunham, did not trust its safety and resigned after less than a year. His prudence and concerns, however, proved to be both sound and prophetic.

Fifteen months after it was finished, during a powerful spring storm in the spring of 1851, the Minot's Ledge tower toppled over into the waves. In it were two young assistant lighthouse keepers -- Joseph Wilson and Joseph Antoine.

John Bennett, the chief lighthouse keeper, was on shore, and could only watch in horror as the tower began to lean and finally collapse into the sea. Bennett later reported that the two lighthouse keepers bravely kept the light going until they literally fell into the surf. He was said to have never forgotten the steady ringing of the station bell over the crashing of the waves.

For days afterward, the personal possessions of the keepers washed ashore on the beaches of Cohasset. Finally, their storm-wracked bodies, too, were laid to rest on the sandy shore.

Even though two men died on the first tower, which can be called one of the greatest mistakes in nautical engineering, the second replacement tower stands as one of the great engineering achievements among U.S. lighthouses in the 19th century.

The tower still flashes a beacon in a one-four-three sequence, which signals "I LOVE YOU." It can be viewed from the beaches of nearby Cohasset or on boat tours. A good museum in Cohasset, established by the Cohasset Historical Society, contains information and artifacts of interest about the historic Minot's Ledge Light.

Nine years later, a replacement lighthouse was raised on Minot's Ledge. The new 114-foot tower was made according to traditional methods -- with heavy blocks of stone rather than forged rods of iron. The upgraded Minot's Ledge Lighthouse was engineered so that any storm-driven waves would force its foundation blocks to bond together more closely.

Steel shafts, cement, and interlocking cut stones were placed in such a way as to make a veritable sea fortress. Within its mighty walls, the new lighthouse keepers could feel safe from any storm and keep up the tradition of service so proudly upheld by assistant keepers Wilson and Antoine.

As with many lighthouses, there are rumors of ghosts in the tower, on the nearby seas, and on the surrounding beaches. The Minot's Ledge tower remains to this day, a symbol of both human tragedy and technological accomplishment.