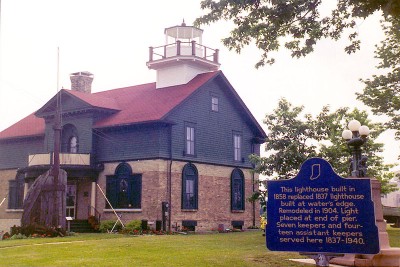 The lighthouse at Michigan City faithfully guided mariners for more than 100 years, from the pre-Civil War era to the dawn of the modern age. The lighthouse keeper had only to climb up the stairs through the roof of his home to check on the light. See more lighthouse pictures.
©2007 Jjegers

Mention the state of Indiana and most people are not likely to think of Michigan City Lighthouse -- or any lighthouses, for that matter. The Hoosier State, located between the Prairie State of Illinois and the Buckeye State of Ohio, is known more for its level-flat corn fields and productive cattle field lots than for large tracts of deep water requiring coastal navigational aids.

However, Indiana does have an important 30-mile coastline on the southern border of Lake Michigan, between the vital regional trading center of Chicago and the various open-water ports along the western coast of Michigan.

It is along this northern Indiana coast of sand dunes and forested hilltops on Lake Michigan that the current Michigan City Lighthouse was raised in 1858 (the original light had been built in 1837).

The Michigan City Lighthouse was designed to serve the busy harbor at Michigan City, an active shipping port for goods produced in central and northern Indiana. The lighthouse rises from a three-story keeper's residence. The tower emerges directly from the pitched red roof, giving the building the quaint appearance of some eccentric cottage in the English countryside that has decided to sprout a lighthouse from its roof.

Although the Michigan City Lighthouse was decommissioned in 1904, local lighthouse aficionados have maintained the site as a museum.

Today the Michigan City Lighthouse can be found just a few miles east of the popular Indiana Dunes National Seashore, where hundreds of thousands of visitors throng every summer to enjoy the dunes, one of the Midwest's greatest attractions.

The Michigan City Light is easily accessible either from South Bend, Indiana, which is located about 30 miles to the east, or from Chicago, which is about 60 miles to the west. The original Fresnel lens is housed in the lighthouse museum.