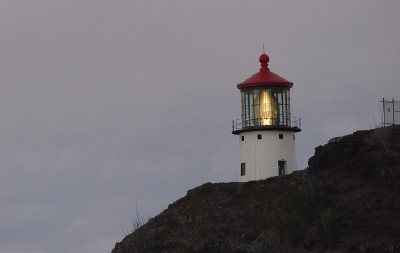 Hawaii has few sites as popular as Makapuu Point, with its commanding prospect over the world. See more lighthouse pictures.
©2007 David Baker

In 1905, about seven years after the United States acquired the Hawaiian Islands, the U.S. Lighthouse Board stated the following:

"All deep-sea commerce between Honolulu and Puget Sound, the Pacific coast of the United States, Mexico and Central America, including Panama, passes Makapuu Head, and . . . [yet] there is not a single light on the whole northern coast of the Hawaiian Islands to guide ships or warn them of their approach to land, after a voyage of several thousand miles."

One year later the U.S. Congress appropriated $60,000 to build a lighthouse at Makapuu Head, the easternmost point of Oahu Island. Because the site was nearly 400 feet above sea level, there was no need to build an extremely tall lighthouse.

The lens, however, was enormous -- eight and a half feet in diameter -- so as to cast a strong beam far out to sea. The hyper-radiant lens, in fact, was the most powerful ever built and used in America.

Makapuu Point, located about 12 miles east of Honolulu at the terminus of the Koolau Range, rises 647 feet above sea level. At the tip of the volcanic point is the Makapuu Point lighthouse, which offers a scenic view down onto the cerulean blue tropical waters and nearby white sand and black lava beaches.

The highland area around the lighthouse is also popular with hang gliders, who take off directly from the rocky cliffs and soar like liberated birds above the lighthouse and sea.

Because of its unusual height, Makapuu Point lighthouse offers one of the most breathtaking coastal panoramas of any in the United States. What's more, visitors to the famous lighthouse can see related maritime sites nearby, which include the Pacific Whaling Museum and Sea Life Park, Hawaii's only marine park.