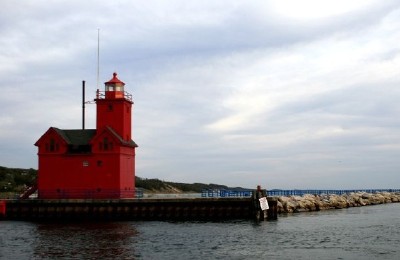 Looking more like some sort of overgrown firehouse than a lighthouse, the Holland Harbor Light is a favorite of artists and photographers. See more lighthouse pictures.
©2007 C Amalia

Originally built in 1872, the Holland Harbor lighthouse is about a third of the way up the Michigan coast and roughly due west from the inland community of Lansing.

The outer coast of Michigan on Lake Michigan is more than 300 miles long. It runs from the open country near the Indiana state line to the heavily forested and rugged shoreline near the Straits of Mackinac in the far north.

It is for the most part a low, flat coastline, with periodic river and stream outlets. Sandy dune fields and clay bluffs rise now and then, and the land becomes more hilly to the north.

Major hazards to mariners include sandy shallows, mud shoals, and offshore rock reefs. Nowhere along that coast is there a more important lighthouse than at Holland Harbor, also known as Black Lake.

Traditionally, commerce on Lake Michigan proceeded north and south in shipping lanes that were parallel to the coast. Thus, from the beginning, a system of lighthouses was built that prominently lit the coasts. The light at Holland Harbor was, and still is, an integral part of that important coastal navigational system.

Ships headed south toward Gary and Chicago depend on the light at Holland Harbor to keep them on course -- and well away from the Michigan coast and its dangerous submerged limestone reefs and sandbars.

Known as "Big Red," the current Holland Harbor Lighthouse was built during the Great Depression, in 1936, and sits at the end of a long pier. It is a sizable structure, rising five stories above the pier, and is painted cherry red to increase its visibility to mariners out on the lake.

The building is also covered with steel plates to protect it from the ice and waves of the winter storms. The Holland Harbor lighthouse is an active station, and at night its light is visible up to 14 miles.