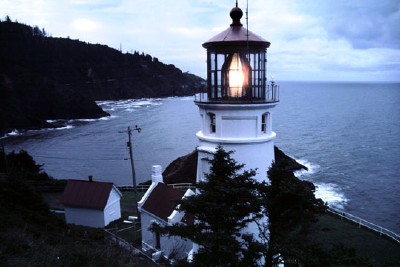 Visitors to Heceta Head lighthouse in Oregon are treated to this wonderful view of the rugged coastline. See more lighthouse pictures.
©2007 Joyce and Ainsley Dixon

Oregon's Heceta Head lighthouse was one of the more challenging lighthouses to build, thanks in part to a rugged coastline.

From the beginning, the west coast of the United States posed unique challenges to lighthouse builders. The coast is long and varied, as it ranges from sheer rock cliffs to heavily forested ridges to rolling dune fields. Violent winter storms and near-daily fogs arise in many areas.

After the Civil War, as the nation's population and business interests surged westward, there was ever-increasing shipping to protect. Nowhere along that thousand-mile coast from Mexico to Canada did the Lighthouse Service find a greater challenge than along the wild Oregon coast, in particular the nearly 100-mile stretch between Cape Foulweather and Cape Argo.

It was there, in 1894, almost due west from Eugene, that the beautiful Heceta Head lighthouse was built. The surrounding, near-vertical rock cliffs -- which evoke the plunging coastlines of Big Sur, California -- made construction of

the light particularly difficult in the area.

The white conical tower was raised on a flattened deck notched in the side of a mountain. Although the tower was only 56 feet tall, its actual height above the waves was 205 feet. The Heceta Head lighthouse was, for its century, one of the more expensive lighthouses built, costing nearly $180,000.

In such a stunning setting, the pic­turesque light tower was destined to become a favorite of lighthouse aficionados and tourists, not to mention maritime painters and landscape photographers.

Even by the off-the-scale beauty standards of northern Oregon, this is a lighthouse that has to be seen to be believed, with the cool green pine forests, black rock cliffs, and chromium blue ocean below. Few drivers can pass by on U.S. Highway 101 and not pull off to admire this awesome beacon.

The lighthouse remains active today, and its light is said to be visible for over 20 miles out to sea.