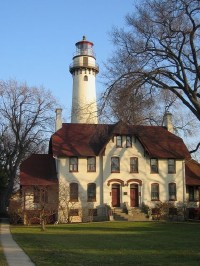 No doubt about it, the keeper's residence at the Grosse Point lighthouse is the nicest in the country. See more lighthouse pictures.
©2007 Jeremy Atherton

The Grosse Point lighthouse is a great symbol of the growth of Chicago as a commercial trade center during the late 19th century.

The "Windy City" of Chicago emerged as the unofficial capital of the Great Lakes region as early as the 1820s, when the Erie Canal brought a wave of eastern immigrants to the area.

Later, the construction of railroads connecting Chicago with the east and west coasts resulted in another boom. Although a third of the city burned down in 1871, it quickly rebounded during the decade that followed with traditional Midwestern vigor.

Through it all, Chicago continued to grow as the single most important port on Lake Michigan, where huge amounts of grain, meat, and other manufactured products were transported through a vast system of shipping routes. At the turn of the last century (1900), Chicago was nearly as busy a port as New York and San Francisco.

Because of its commercial importance as a center for regional trade, a series of lighthouses were built along the coasts east and west of Chicago. Of these, the loveliest of all was the Grosse Point lighthouse, which was raised in Evanston in 1873.

The conical white tower, which stood at 113 feet, helped navigators of Chicago-bound ships find their way along the coast. It showed a powerful second-order Fresnel lens.

On the station grounds down below, the Italianate lighthouse keeper's house was a true thing of beauty and eventually became one of the most sought-after duty stations in the Lighthouse Service. (Compare this to lighthouse duty at, say, Cape Flattery, a lonely windswept island far from good schools, clinics, or restaurants.)

Although the Grosse Point lighthouse went out of service in 1935, it continues to be maintained by local government as both an active, private aid to navigation and as the centerpiece of the city's Lighthouse Park.