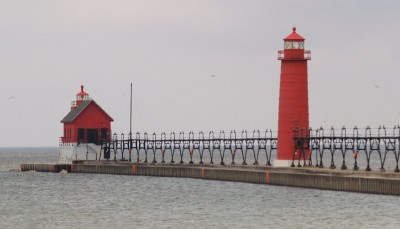 Positioned as it is far from shore, the Grand Haven lighthouse is visible far out on the lake, warning mariners of shallow waters close to shore. See more lighthouse pictures.
©2007 takomabibelot

The Grand Haven lighthouse was built for a purpose different than many of the other lighthouses that shine on the Great Lakes.

Quite often the lighthouses on the west coast of Michigan, as well as elsewhere on the Great Lakes, are found near the outlets of major rivers. The reason is that human settlements naturally took hold in those areas, where resources were plentiful, traders could conveniently meet, and commercial fishing was reliable.

As water-borne trade developed, a need arose to provide navigational aids in the form of lighthouses. These lights were generally more in the form of harbor lighting aids than primary coastal beacons.

Such was the case with the Grand Haven lighthouse, set near the entrance to one of Michigan's better harbors, the Grand Haven Harbor. Not only is the sizable harbor a natural anchorage for lake vessels requiring a deep port, but it is also fed by the waters of the Grand River. The river runs through Grand Rapids, an important inland center of commerce 35 miles to the east.

The first (south pier inner light, built in 1905) was a 50-foot cylindrical tower made of steel plates. On the top was a small light room. The second is a short, box-like structure that had served as the fog signal building. This second structure was moved to the pier extension in 1905 and had a lens room added.

Subsequently, both towers were covered with iron plates to offer them better resistance against ice and waves.

Visitors to the town of Grand Haven can walk on the pier and view the two lighthouses up close. These unusual twin pier lights are among the most interesting and historic in the Great Lakes region.