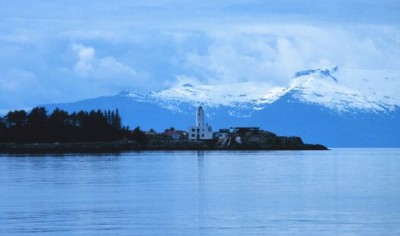 Alaska's Five Finger lighthouse is not as remote as one might think. Each summer, hundreds of boats ply the nearby waters, and visitors on the Inland Ferry and on cruise ships sail by at regular intervals. See more lighthouse pictures.
©2007 U.S. National Oceanic and Atmospheric Administration

Located about 70 miles south of Alaska's state capital, Juneau, the Five Finger lighthouse was built in 1902 to guide vessels along the dangerous areas of the Inside Passage.

The fabled Inside Passage of the Alaskan panhandle has been a favorite of maritime travelers since the days of John Muir. The distinguished naturalist wrote regularly of the scenic wonders of the coastal region for Century magazine in the late 19th century.

Even at that time, the area was known for its dangerous shoals and reefs. (The northern waters became especially well known in this regard in 1989 after the grounding of the oil tanker Exxon Valdez on Bligh Reef.)

For that reason, a lighthouse was placed on an island just north of Kupreanof Island. The area was known as "the five fingers" by shippers for the finger-like shape of the forested islands.

The current Five Finger lighthouse, with its art deco style, was completed in 1935, after the original wooden keeper's home and lighthouse burned down. Built of reinforced concrete, the new main building also serves as a sturdy platform for the nearly 70-foot tower.

Interestingly enough, the Five Finger lighthouse was one of the last to become automated (1984) in the United States. The lighthouse is often seen by those who take the Alaska Maritime Highway on scenic summer cruise vessels.

Hopefully, the Five Finger lighthouse will have a better fate than that of another famous Alaskan lighthouse. The Scotch Cap lighthouse in the Aleutian Islands was swept out to sea by a tidal wave on April 1, 1946, along with its complement of five men.

The Five Finger lighthouse certainly serves a vital purpose, given the sheer volume of traffic along the Inside Passage, which includes not only ferries and cruise ships but also a steady stream of commercial crabbers and

shrimpers -- as well as numerous sport fishing vessels. The region truly is, as John Muir wrote, "a wonderland" of nature.