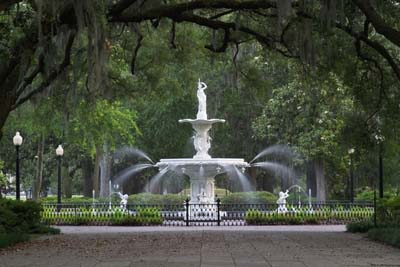 Visitors to Savannah may opt for a tour via horse-drawn carriage, where guides will take you through such highlights as Forsyth Park Fountain.

Savannah is the grand old dame of the South. Founded in 1733, the city has a colorful history. Its early residents included settlers from Europe, slaves, sailors, merchants, and pirates.

Savannah's historic district is filled with elegant homes. Among these lovely mansions you'll find the home of Juliette Gordon Low, the founder of the Girl Scouts. The home has been converted into a museum and is a popular destination for Girl Scout troops across the United States. Families enjoy touring the elegant home as well.

Another highlight of the historic city is Old Fort Jackson, which was built in 1808 and helped protect the coast from British warships during the War of 1812. Visitors can tour the fort and, on certain days, watch battle reenactments and blacksmithing demonstrations. A popular stop is the fort's "privy" (bathroom) -- its flushing action was provided by the currents of the Savannah River.

You can also tour Savannah by horse-drawn carriage. Guides will treat you to some background details about the city's notorious characters and occurrences. If your kids enjoy their history with a slightly spooky twist, they'll like the tours of the supposedly haunted areas of Savannah.