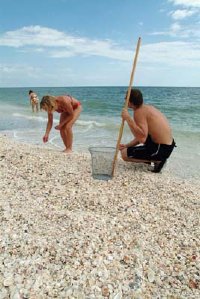 Low tide on Sanibel Island brings out the shelling enthusiast in everyone. See more pictures of Florida.

Sanibel Island is a shell collector's paradise. Areas of the soft sandy beaches are festooned with a variety of shells, including scallops, whelks, and kitten's paws. Shell collectors easily assume the Sanibel Stoop as they comb for tiny treasures washed up by the tide.

Don't become too engrossed in your collecting, though, or you'll miss the dolphins that frequently feed just offshore. Visit the island's Bailey-Matthews Shell Museum before you begin your beachcombing to learn the names of the shells you'll find.

The island is known as a refuge for nesting sea turtles. Residents try to keep lights at a minimum at night in order to avoid confusing the turtles into heading farther inland. As a result, there are no streetlights to illuminate the roads at night on the island.

Bicycle riding is quite popular on Sanibel, and bike trails separate from the roads interlace the island. Most resorts have their own fleet of two-wheelers, including some with child seats and others sized for children. Bike rentals are also available on-island.

Almost half of the island is a nature preserve and sanctuary, and when property is put up for sale, the residents often buy it and add it to the sanctuary. Visit the Ding Darling National Wildlife Refuge to see abundant bird life, alligators, and other creatures. You can explore by walking its trails and boardwalks, by canoeing or kayaking its winding waterways, or by biking.

According to building code, no structure on Sanibel Island may exceed four stories, so accommodations are scaled down and casual, and the stunning beaches are rarely crowded.