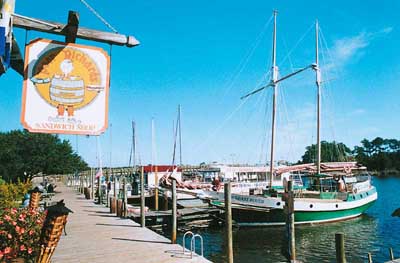 Today Roanoke Island is a fishing community and home to shopkeepers and artists.

In 1587, Sir Walter Raleigh of England sent an expedition to the New World to Roanoke Island, a 27-acre isle in Croatan Sound off what is now the North Carolina coast. About 116 settlers, mostly families, sailed across the Atlantic Ocean and established a village there. But they arrived too late in the year to plant crops, and their leader, John White, returned to England for supplies. Because of tensions between England and Spain, White couldn't return to Roanoke Island until 1590. When he arrived, the village was deserted. Roanoke became known as the "Lost Colony." The mystery remains unsolved to this day.

Modern Roanoke Island is home to a historic park that tells this story and others through living-history demonstrations, a replica of a 16th-century sailing ship, and an interactive museum. A walk along the boardwalks and nature trails reveals native wildflowers and protected maritime forest. There's also an outdoor pavilion that hosts a performing arts series.