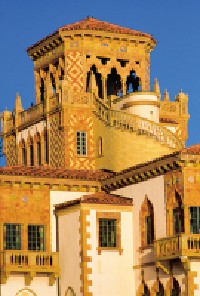 In its time, the Ringling Bros. and Barnum & Bailey Circus was the greatest show on earth. It became the world's most successful and enduring circus, formed in 1919 when the Ringling Bros. (led by John Ringling) and Barnum & Bailey circuses merged. John Ringling had a passion for art, collecting works while touring Europe. In 1924, he and his wife, Mable, began building their Italian Renaissance-style mansion on Sarasota Bay. The building was called Cà d'Zan, meaning "House of John" in Venetian dialect.

The mansion is a work of art. The building is capped by a 60-foot tower that was illuminated when the Ringlings were home. Its living room (called the Court) is two-and-a-half stories high. An impressive 8,000-square-foot marble terrace offers awe-inspiring views of Sarasota Bay. In 1927, the Ringlings began building the John and Mable Ringling Museum of Art (now also known as the State Art Museum of Florida). The Ringlings wanted to share their love of and collection of art with the people of Florida. Their art treasures include more than 10,000 paintings, sculptures, drawings, prints, photographs and decorative arts.

The museum holds the largest private collection of paintings and drawings by Peter Paul Rubens as well as masterworks by Lucas Cranach the Elder, Nicolas Poussin, Frans Hals, and Anthony Van Dyck. All in all, there are 21 galleries of European paintings (including more than 700 Old Masters), antiques, Asian art, American paintings and contemporary art. A new addition to the estate in 1948 was the Circus Museum. Visitors can relive the magic of the circus through exhibits of the costumes, wagons, performance equipment and other memorabilia that convey its history. Among the attractions is a scale model of the Ringling Bros. and Barnum & Bailey Circus as it was from 1919 to 1938.