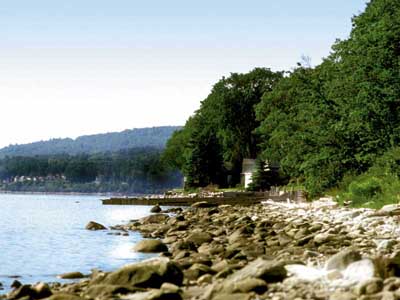 The rocky shoreline of Penobscot Bay harbors quaint Maine towns with an authentic Down East feel.

Penobscot Bay is Maine's real Down East. While the words "Down East" now refer to the coast of Maine and its culture, the term came from ships sailing downwind from Boston to Maine. If you're looking forward to exploring the real outdoors, you've found your place. Choose among recreational sports such as fishing for trout, smallmouth bass or landlocked salmon; hunting bear, moose, deer, grouse or snowshoe hare; or sailing a three-masted schooner on the bounding main.

The region has Down East civilization, too. Should you seek a vacation spot that has been visited by the rich and famous, from actors to presidential candidates, there are the Penobscot Bay towns of Islesboro, North Haven and Vinalhaven.

If you're eager for a taste of authentic Down East cuisine, the bay area has dinners of lobster and lobster cakes, steamed mussels, corn on the cob, and New England clam chowder, and breakfasts of pancakes and waffles, Maine maple syrup, and Maine blueberry jam. Penobscot Bay lies just southwest of Acadia National Park and borders Isle au Haut, which in 1943 became the last contribution to Acadia.

Towns around the bay include Camden, Bar Harbor, and historic Castine, which was settled by the French in 1613. These nearby towns provide convenient lodging, fine dining, charming shops, and local galleries. There's also Fort Point State Historic Site, which has Fort Point Light (a lighthouse built in 1857), miles of hiking trails, and a gorgeous panorama of the bay and the islands surrounding it.

Address: Penobscot Bay at ME-199 and By the Bay Ln.