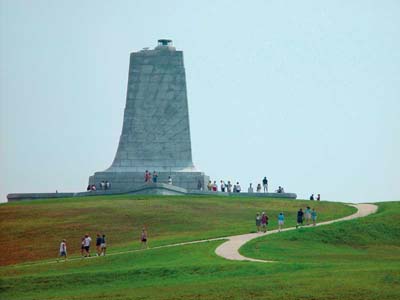 Outer Banks is famous as the scene of the first airplane flight. The Wright Brothers Memorial on Kill Devil Hill pays tribute to the event.

Today a particularly serene stretch of sea and sand, North Carolina's Outer Banks belie their treacherous past. It was here that the people of Roanoke Island settled and then mysteriously disappeared in the 1580s.

Among the pirates and buccaneers who hid their booty around these islands in the18th century was the infamous Blackbeard. He materialized in the area with a price on his head and was quickly captured and executed.

The waters off the Outer Banks are so hazardous that they have earned the name "Graveyard of the Atlantic" due to the thousands of ships that ran aground on the shoals and were destroyed by storms. Historic lighthouses once used to warn sailors of danger still dot the coastline.

Today, beach lovers visit these legendary islands to enjoy the seemingly endless stretches of ocean and soft sand. Bird-watchers tour the wildlife refuges that host millions of migratory birds along the shores and inland marshes. Families who can tear themselves away from the beach should visit lively Roanoke Island Festival Park, which has a hands-on museum, free concerts and plays, and a replica of the ship that brought over the colonists who disappeared.