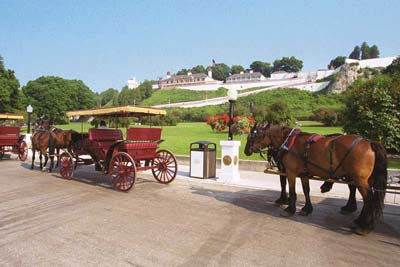 Tour Mackinac Island on bicycle, foot, or by horse-drawn taxi.

Visitors take a step back in time when they arrive at Michigan’s Mackinac Island. Cars are prohibited on this leisurely island escape -- they were banned shortly after the first "horseless carriage" motored off the ferry in the early 20th century.

Visitors tour the island -- which measures three miles by two miles -- by bicycle, on foot, or in a horse-drawn taxi. Hotels and bike shops rent fleets of two-wheelers, and many guests bring their own bikes to the island on the ferry.

More than 75 percent of the island is Mackinac Island State Park, which includes 18th-century Fort Mackinac. Inside the fort you'll see enthusiastic reenactors and 14 original buildings with interesting displays that tell about life for American soldiers and their families circa 1880.

In the Kids' Quarters, children can revisit the styles of the 1800s. Lively fife-and-drum performances take place daily during the summer months.

The island's quaint Victorian-era town is also known for its fabulous fudge. Children enjoy visiting the many candy shops to sample the creamy confection. It's an extra treat to watch as it is poured from large copper kettles onto marble cooling slabs and folded into fudge loaves.

Hours of Operation: Note that Mackinac Island and the Grand Hotel are summer destinations operating between May and October annually.