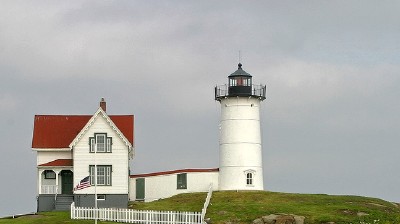 ©2007 Erik Anestad Although visitors to the Cape Neddick Lighthouse are separated from the tower by a short expanse of saltwater, the best views are actually from the nearby coast. See more pictures of lighthouses.
2007 Erik Anestad

The Cape Neddick Lighthouse, also known as the "Nubble Light," sits on the Nubble, a small stony island off the extreme southern coast of Maine at York Beach.

Although inaccessible to visitors, the Cape Neddick Lighthouse is one of the more scenic lighthouses in New England. It can be viewed from York Beach across a stretch of saltwater.

Built in 1879, the Cape Neddick Lighthouse arrived toward the end of the great lighthouse building boom that began in the early 1850s. The light consists of a white wood-frame residence, a steep, dark-red roof, a covered walkway, and a 40-foot-high cast-iron tower that emits a flashing red signal light.­

­The clapboard keeper's house is in the classic Victorian style, right down to the meticulous details under the eaves of the roof. Two strong wooden outbuildings, set a short distance from the lighthouse among the barren rock, complete the picture.

Each Christmas the locals cover the lighthouse and keeper's house with electric Christmas lights, presenting one of loveliest holiday spectacles in the country.

Historically, this lighthouse has been important in keeping vessels away from the rocky stretch of coast between Portsmouth, New Hampshire, to the south and Portland, Maine, to the north. The nearby communities of York and Kennebunkport have grown into some of the wealthiest enclaves in America. A photograph of the Cape Neddick Lighthouse was included in the 1977 Voyager spacecraft, serving as a representation of Earth's civilization.