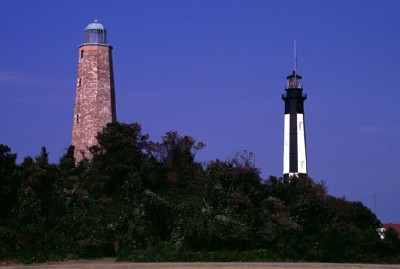 One of the quiet joys of the Cape Henry lighthouse is walking the dunes, fields, and beaches nearby. The seas can be a source of solace and renewal. See more pictures of lighthouses.
©2007 Joyce and Ainsley Dixon

Historically, the Cape Henry Lighthouse has been one of the most important navigational aids along the mid-Atlantic coast. Cape Henry is located

in southeastern Virginia at the southern entrance of Chesapeake Bay, an important saltwater fishing region as well as a natural corridor for commercial shipping.

As early as 1721 the governor of the Virginia colony was actively promoting the idea of a lighthouse at that location. Getting all involved parties to agree -- Colonial and British authorities as well as private companies -- proved an insurmountable obstacle, however.

The Ninth Act of the First Congress, established in 1789, stated that the government would build this important lighthouse. It was not until 1792 that a lighthouse was finally constructed on the Cape Henry site.

The 90-foot tower, built of locally quarried sandstone blocks, has stood on

the spot for over 200 years, weathering all manner of hurricanes and ocean-born storms and squalls.

The Cape Henry Light was outfitted with a modern Fresnel lens in 1857 and, during the same period, its interior was reinforced with a layer of bricks. After being slightly damaged by Confederate troops early in the Civil War, the lighthouse was returned to duty in 1862 by Union forces.

Nineteen years later, in 1881, a second tower was built near the original Cape Henry Light. That cylindrical tower, made of cast iron, stands 163 feet tall. The new lighthouse was fitted with a first-order Fresnel lens that casts its light far out on the waters of the bay.

The original Cape Henry Light still stands, and can be seen near its replacement tower.