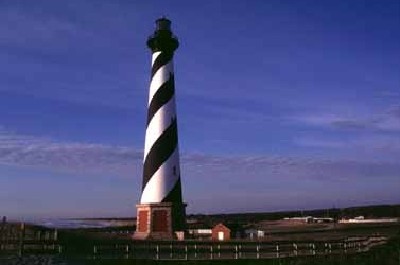 It is a long walk up the steep stairs to the top of the Cape Hatteras Lighthouse, which is the tallest lighthouse, from ground to roof, in the United States. See more light house pictures.
2007 Publications International, Ltd.

In the National Archives, there is a pen and ink sketch made by Brigadier General George Nicholson on November 9, 1870, of the Cape Hatteras Lighthouse in North Carolina as it existed in that year.

The sketch shows the Cape Hatteras Lighthouse pretty much as we see it today, a towering octagonal structure rising massively above the beach and surrounding sand hills. The simple drawing evokes much of the beauty and power of this fabled tower.

The Cape Hatteras Light has now existed, in one form or another, for nearly two centuries and is probably the most famous lighthouse in the United States. It is both a visual icon and a moving symbol of humanity's eternal battle with the fury of the sea.

Several factors have contributed to the importance of the Cape Hatteras Lighthouse over time, all of them related to its unique geographic location. First, the Cape Hatteras region -- a 300-mile-long array of barrier islands called the Outer Banks -- juts far out to sea, putting its fragile lowlands, quite literally, in the middle of the Atlantic Ocean.

Second, the eastern continental shelf, a natural protective barrier, is shorter along the Outer Banks than along the Georgia and Florida coasts. Third, a steady stream of tropically born hurricanes annually tracks north on a collision course with the Outer Banks.

Fourth, just offshore from Cape Hatteras, the warm waters of the Gulf Stream meet up with the cold waters of the Labrador Current, creating a deadly mix that can quickly produce sudden squalls and violent storms.

The combined effect of all these factors has caused mariners for centuries to call the seas and shoals around Cape Hatteras the "Graveyard of the Atlantic." Records show that more than 2,000 ships, both large and small, have sunk in the area since Colonial times, many in the dreaded Diamond Shoals, an enormous underwater sand bank projecting more than 12 miles eastward from the cape.

Although Congress authorized the Cape Hatteras Lighthouse in 1794, political infighting dragged the construction process on for years. It was not until 1803, during the administration of Thomas Jefferson, that the first 95-foot stone tower was raised.

Unfortunately, it was not tall enough to cast a light beyond the treacherous Diamond Shoals. When the Cape Hatteras Lighthouse was formally inspected by the U.S. Lighthouse Board in 1851, it was described as being "the worst light in the world."

After the Civil War, the federal government recognized the necessity of raising a new, modern light at Cape Hatteras Point. A 193-foot lighthouse was built on a solid eight-sided foundation with deep iron and timber pilings set into the sand and clay.

It was completed in 1870, just as national and international seaborne commerce was beginning to return to the war-torn ports of the Old South. Although it has weathered more than 100 hurricanes in its 130-year history, the Cape Hatteras Light, which once stood more than 400 yards from the breaker line, was, until recently, at the ocean's edge, a result of steady beach erosion.

Both the North Carolina state government and the federal government worked to preserve America's most beloved lighthouse, and on July 9, 1999, it was moved back from the eroding beach at a cost of $10 million. Given the importance of this light, their success seems assured.

Part of the fun and adventure of viewing the Cape Hatteras Lighthouse resides in the journey to get there. A trip to the light begins on the mainland, near the small sunburned-tourist community of Manteo on Roanoke Island. Visitors drive across the causeway to just below Nags Head, where the road turns south along the windswept landscape of the Outer Banks, the sea on one side of the asphalt road, the grassy sand dunes on the other.

A journey of some 50 miles, every inch of which is like something from a Winslow Homer painting, ends at Cape Hatteras, with its giant spiral-striped lighthouse looking resolutely over the sea.

On a clear day, sightseers with binoculars can spot the Diamond Shoals Lighthouse, which sits like an offshore drilling platform directly over the perilous Diamond Shoals. Visitors to the Cape Hatteras Lighthouse will also find a delightful visitor center and a museum of Outer Banks maritime history in the old lighthouse keeper's residence near the light.