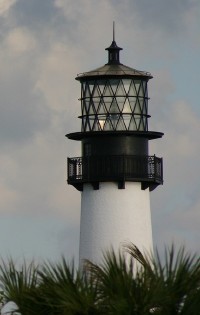 At the heart of every lighthouse is the light and lens assembly. Working together, they project the beacon far out onto the surrounding waters. See more pictures of lighthouses.
©2007 Janusz Leszczynski

The Florida Keys are one of the loveliest landscapes in the United States: the saltwater shallows with their infinite shadings of azure and turquoise, the sun-washed white sand wherever an island rises above the water, the great purple thunderheads that can rise on the horizon at any time of the year. This setting is the home of Cape Florida Lighthouse.

From Miami, the keys run south and west for nearly 200 miles, past Elliot Key and Key Largo and Indian Key, until finally, at Hemingway's Key West, they are within only 90 miles of the Cuban coast. This is the sort of place where every third person has a boat of some sort, and most people recreate on the ocean as often as those who live near the mountains seek solace in the peaks.

From the beginning, the Florida Keys have posed any one of a number of serious problems for mariners. This was true even in the earliest days of exploration during the 16th century, when Captain Rene Laudonierre was exploring the area for France and his vessel was unceremoniously wrecked on the south Florida coast.

If the Florida Keys pose navigational problems during calm weather, the situation becomes even more dire during the numerous hurricanes that beset the keys every year. Nowhere was the need for a reliable lighthouse more pressing in this area than at the head of Biscayne Bay, just south of where Miami is located today.

It was in 1825 that the first lighthouse was built at Key Biscayne, shortly after the United States acquired Florida from the Spanish. The lighthouse was seen both as a navigational aid for Biscayne Bay -- since trade was burgeoning between the Old South and Latin America -- and as part of a system of coastal defenses against the pirates and political turmoil of the Caribbean, traditionally known as a dangerous area.

The lighthouse consisted of a conical brick tower, generally painted white, and a black light room.

Not long after it was raised, during the Second Seminole War, the Cape Florida Lighthouse was attacked by marauding Seminoles in one of the most dramatic incidents in the history of American lighthouses. The assault occurred on July 23, 1835.

In midafternoon on that day, approximately 40 warriors carrying muskets, with their faces painted with war paint, moved up through the mangroves. The lighthouse keeper, John Thompson, and his assistant moved into the brick tower and locked the heavy wooden door.

Armed with muskets, they managed to defend the lighthouse for quite some time, but finally the warriors set fire to the door and window. As the wooden tower steps burned, the keeper and his assistant sought refuge in the lens room.

As the flames climbed higher through the wooden tower steps, Thompson's oil-soaked clothing began to burn. Thompson later recalled that he thought the end was near. The Seminoles, perhaps assuming they had killed the men, retreated.

A naval vessel, the USS Motto, patrolling nearby saw the flames. Its crew set out to save Thompson, who had been seriously burned and was stranded in the tower room. His assistant had been struck by a musket ball and had not survived the attack.

The act of saving Thompson required some ingenuity on the part of the sailors because, with the tower steps burned away, there appeared to be no way to reach him. Finally, someone came up with the idea of shooting a line up to the tower room. Thompson then hooked the line to the railing, and two sailors were able to climb up. Using a makeshift litter, they lowered Thompson to the ground.

For more than a century, the Cape Florida Light stood abandoned and lightless. In 1996, however, the lighthouse was restored by the Dade County Heritage Trust, which is devoted to maintaining historic buildings in the greater Miami area.