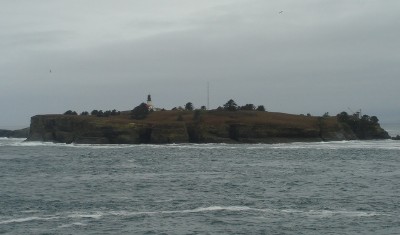 Cape Flattery was named by Captain James Cook on his celebrated voyage of discovery around the world in 1778. Why Captain Cook named it "Cape Flattery" is not known. What is known is that few lighthouses are more isolated than the Cape Flattery lighthouse.

Located on a small island about 30 miles south of Vancouver Island, British Columbia, the Cape Flattery lighthouse marks the southwestern entrance to the often stormy Strait of Juan de Fuca.

The Cape Flattery lighthouse was established on Tatoosh Island in 1857, just one year after the first lighthouse in the Pacific Northwest was built at Cape Disappointment on the Columbia River. The installation at Cape Flattery included a modest residence in the popular Cape Cod style of the period, as well as a 65-foot stone tower that rose directly from the red, metal roof.

Because the top of Tatoosh Island is itself 100 feet above the level of the sea, the light was quite high for the area -- 165 feet above the surf line.

Tatoosh Island was, at the time, a holy area for the Makah coastal Indians of northwestern Washington. The Makah came by canoe to the area to bury their dead.

In fact, when one of the early government expeditions arrived on Tatoosh Island in the early 1850s, they found quite a few Makah Indians waiting for them. Although no hostilities broke out, subsequent expeditions spread a deadly small pox epidemic among the Makah. Relations between the United States Government and the Makah Indians remained strained for years.

Twenty-six years after the Cape Flattery lighthouse was built, in 1883, the federal government added a weather station to the island. Still later, a radio transmitter was built on the island. Eventually, more than 40 people lived around the lighthouse, and a small schoolhouse was even built there.

Change came permanently, though, in 1966, when the weather station was decommissioned and most of the inhabitants were forced to leave.

Although unmanned since 1977, the light, fog signal, and other navigational aids are still maintained by the Coast Guard, which flies in periodically with helicopters to check on the remote station. Unlike many other lighthouses built in the 1850s, the Cape Flattery lighthouse remains an essential beacon to commerce.