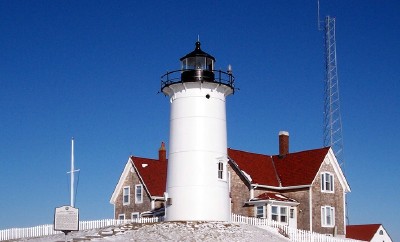 Cape Cod is famous for its quick-developing fog banks, as the warm waters of the Gulf Stream meet the colder air of the far north. At such times, the Cape Cod Lighthouse can be a real lifesaver for mariners disoriented by atmospheric conditions. See more pictures of lighthouses.
©2007 Karen Cox

"This lighthouse, known to mariners as the Cape Cod or Highland Light, is one of our 'primary sea-coast lights,' and is usually the first seen by those approaching the entrance of Massachusetts Bay from Europe."

So wrote renowned Massachusetts naturalist Henry David Thoreau in 1855, after one of his several visits to Cape Cod. Although Thoreau reported in his essay that the resident lighthouse keeper believed the Cape was in danger of being overrun by the sea, both the narrow sandy peninsula and the sturdy lighthouse are still standing, a century and a half later.

Today, deep within the borders of the 43,000-acre Cape Cod National Seashore, the Cape Cod Light is among the most important historic sites on the peninsula. The lighthouse is the oldest on Cape Cod, having been established in 1798.

The tower is 66 feet tall, occupying a sandy bluff that rises more than 130 feet above the beaches. Consequently, its light is visible far out to sea. Over the years the lighthouse has seen the cliffs on which it sits increasingly erode. It was rebuilt in 1857 and then, in 1996, it was saved from erosion by engineers, who moved it back 450 feet.

Thoreau once spent a night with the lighthouse keeper and reveled in the keeper's stories of great storms. Having been replaced by an array of sensors and timers and by a powerful flashing beacon, the faithful keeper and his Fresnel lens are no longer present.

Still, the historic tower and the splendid maritime scenery remains as Thoreau knew it. The Cape Cod Light is one of the most beautiful on the northeast coast. It should be visited by all those who love lighthouses and who appreciate the rich history of Cape Cod.