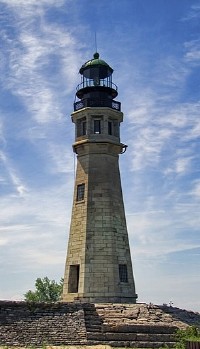 Lovers of architecture admire the details of Buffalo Lighthouse, one of the handsomest towers on the Great Lakes. See more lighthouse pictures.
©2007 Edwin Bronckers

Since its earliest days, Buffalo, New York, has been important geographically and commercially because of its proximity to the natural resources of Canada and its strategic position on the Niagara River, the major waterway between Lake Erie and Lake Ontario.

The site now occupied by Buffalo was a natural place for a regional political and business center to develop. Although a lighthouse was planned for Buffalo as early as 1805, Buffalo Lighthouse was not built until 1818, well after the War of 1812.

That is probably just as well, because the war saw British troops set fire to parts of Buffalo, and a lighthouse would have been a prime target.

Buffalo Lighthouse was the first to be built on Lake Erie. The creation of the Erie Canal in 1825 hastened the growth in importance of Buffalo as a vital commercial port and underscored the necessity of placing a good lighthouse on the southeastern shore of Lake Erie.

A new tower, raised in Buffalo in 1833, was constructed in the popular octagonal shape with masonry blocks made from locally quarried limestone. It was located at the end of a pier nearly 500 yards long, and it stood 68 feet above the waters of Lake Erie.

The tower alerted vessels to the fact that they were approaching both the port of Buffalo and the Niagara River, which shortly turns into Niagara Falls. This tower was replaced in 1872 by a new lighthouse with a stronger light and a longer pier of 4,000 feet -- nearly one mile!

Tourists today actually visit the older lighthouse, which is on the grounds of the Coast Guard station near the downtown convention center. Although the original tower was derelict for nearly a century, Buffalo citizens began restoring it during the 1960s, and it has since become one of the most popular sites in the city.