by the Editors of Publications International, Ltd. Nov 5, 2007 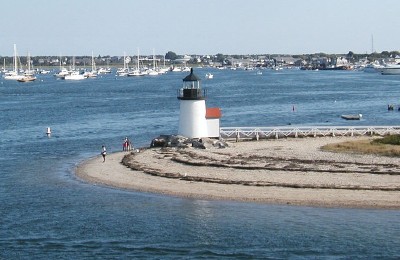 Every summer thousands of tourists travel to Nantucket Island to pay a visit to the lighthouse at Brant Point, walking along the red-painted walkway over the dunes.The lighthouse owns the distinction of being the lowest, in terms of elevation, in all of New England. See more pictures of lighthouses.
©2007 Tim Sackton

There has been a lighthouse on Brant Point, Massachusetts, at the entrance of Nantucket Harbor, since 1746, making this one of the oldest lighthouse sites in the United States.

The scene on the island of Nantucket today is very different from that of 250 years ago, when there were only windswept hills of sea grass and scrub oak, with sturdy Atlantic whalers and fishing dories resting in the harbor.

Today a myriad of summer homes sit on the gentle hills above the small port, overlooking literally hundreds of private sailing vessels anchored in the waters below. Although not as crowded as nearby Martha's Vineyard, Nantucket is among the most popular vacation sites on the northeastern coast.

This easily accessible lighthouse is a favorite tourist destination on the island.

The current lighthouse at Brant Point owns the distinction of being the shortest in New England -- its light is only 26 feet above sea level.

The building is reached by walking over an elevated wooden walkway across a narrow sand spit. The walkway leads to a pile of rocks on which the tiny lighthouse sits. This tower is the tenth to be built in this area since the first was raised by Colonial mariners in 1746.

In the early days, of course, the major reason for a beacon was to safely guide the fishermen into port. Nantucket was one of the coastal centers for the busy Atlantic fishing and whaling trade in the 18th and 19th centuries.

After numerous towers were lost to hurricanes and other violent northeastern storms over the years, a more permanent lighthouse, standing to this day, was finally raised in 1901. Its blinking red light is visible for about ten miles out to sea.