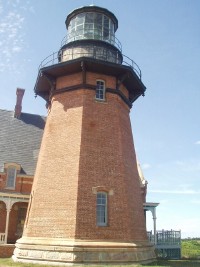 The Block Island Southeast lighthouse is distinctive in the size of its oversized catwalk platform. See more pictures of lighthouses.
©2007 Joe Mad

Fifteen miles beyond Montauk Point, the easternmost spot on Long Island, is Block Island, a 25-square-mile piece of windswept land to the east of Long Island Sound.

Roughly midway between the lighthouses at Montauk Point, New York, and at Point Judith, Rhode Island, the Block Island Southeast lighthouse has served as an essential navigational aid for ships cruising into Long Island Sound or proceeding south toward New York City.

The local waters are known for their submerged reefs, strong currents, and -- because of the close proximity to the North Atlantic -- their quickly developing fog banks and storms. This lighthouse has directed more than one vessel away from danger

Visitors to Block Island normally take the ferry, but air transport is also available. What they find on their arrival is a quiet, scenic landscape that is far less crowded and hectic than Martha's Vineyard or Nantucket Island just to the north.

The Block Island Southeast lighthouse itself, with its thick octagonal tower and attached manorial living quarters, resembles something from a Stephen King novel and is said to be haunted.

Built of weathered red brick, with a steep roof of green shingles and windows with white frames, the lighthouse keeper's home evokes both the architecture and the way of life of the bygone Victorian era.

The Block Island Southeast lighthouse occupies a rugged but soft cliff of clay and sand that is eroding from the effects of wind, rain, and gravity. During

the early 1990s, the lighthouse was jacked up on hydraulic lifts and moved back from the brink by nearly the length of a football field, where it will, it is hoped, be safe for many decades to come.