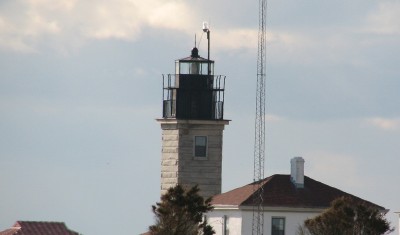 Beavertail Light, the country's fourth lighthouse, was built of rubble stone in a square design. It was sturdy and practical, like its makers. See more pictures of lighthouses.
©2007 Lara Mercer

In 1749, a bit more than a century after Roger Williams was exiled from Massachusetts and moved west to form the wilderness outpost of Providence, the Colonial authorities of Rhode Island decided to build a lighthouse on Conanicut Island, near the entrance of Narragansett Bay. It came to be known as Beavertail Lighthouse.

The area had become well known for its busy maritime traffic, and a reliable lighthouse was needed on the south end of the island to alert sailors that they were approaching the narrow channels leading to Providence. The Beavertail Light, as it was called, would become New England's third, and America's fourth, light station.

Four short years after the original light was raised, it was destroyed by fire and rebuilt. It was burned again, this time by the British during the American Revolution in 1779. The lighthouse remained dark for the rest of the war, but was repaired after hostilities ceased.

In 1793 the new federal government assumed control of the Beavertail Light. In 1851 the U.S. Lighthouse Board authorized the construction of a modern new building on the site. Completed in 1856, the square granite tower is still in existence and supports a flashing, white electric light visible about 20 miles out to sea.

Today, the scenic Beavertail Light occupies its own state park, and the assistant keeper's house is maintained by the state of Rhode Island as a lighthouse museum.