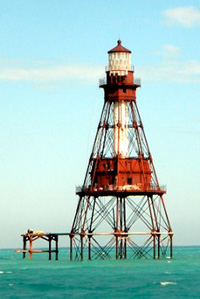 Mention the Florida Keys and most people generally think of writer Ernest Hemingway and his famous after-hours haunts, such as Sloppy Joe's Bar and Grill. Others envision world-class fishing or nearly year-round warmth and sun, but another popular Keys landmark is the American Shoals Lighthouse.

Once a hideout for notorious pirates, Key West later became a thriving port and fishing center -- and then a renowned vacation spot -- on the northern edge of the Caribbean. Through it all, the Key West region has been a perilous one for mariners, with numerous coral reefs, submerged limestone formations, and sandy shoals. Most of these hazards are impossible to see until one is nearly upon them.

It is also an area frequently beset, from July through October, by killer tropical storms borne on the Southern Atlantic.

The deadliest reef of them all is located near Looe Key, about 20 miles north of Key West. Although no one has ever been able to compile a complete historical list of the ships that have gone down on the reef, the list of major vessels over the centuries probably numbers at least into the dozens.

In the early years, local authorities erected various day marks over the reef, including a tall, unlighted piling. These, however, often did not alert mariners of the reef's presence until it was too late. At night, there was no way of alerting ships of the nearby danger.

Once Florida attained statehood, the United States Government began to build lighthouses up and down its long coastline on the Atlantic Ocean and Gulf of Mexico in real earnest. In 1878, Congress finally appropriated the necessary funds ($75,000) to build a lighthouse on the reef near Looe Key.

The American Shoals Lighthouse was actually built in the shipyards of New Jersey, and then transported by freighter over a thousand miles to the Florida Keys. The 109-foot spider-like tower was built atop a massive subsurface platform of rock.

It included an octagonal lighthouse keeper's residence, located about 40 feet above the water, and a first-order Fresnel Lens. Like many government projects, the cost of the American Shoals Lighthouse kept increasing (the final bill was $125,000).

The light was fully automated in 1963 and is still operational. The flashing light, which has undoubtedly saved countless ships and lives, is said to be visible for about 12 miles.