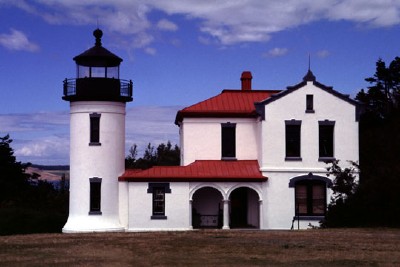 The striking architectural design makes the Admiralty Head lighthouse one of the most beautiful in the Pacific Northwest. See more lighthouse pictures.
©2007 Joyce and Ainsley Dixon

Whidbey Island, home of the Admiralty Head lighthouse, is fast becoming one of the most popular suburban areas in the greater Seattle area. Accessible by a short ferry ride from the burgeoning metropolis, the island offers city-dwellers a quiet, semirural refuge at the end of the work day.

Here, those who work in the busy city across the waters can find relaxing pastoral scenes and an abundance of wildlife. It is not unusual to spot an orca, or killer whale, out on the saltwater, or see a bald eagle eating a salmon in a seaside tree. There are also great opportunities for those who love kayaking, boating, and fishing.

The island is also the site of four wonderful state parks, including Fort Casey State Park, which, among other things, protects the historic Admiralty Head lighthouse. It was this light that helped to show mariners the way on their final transit of Puget Sound toward the piers, loading docks, and shipyards of Seattle and Tacoma.

The initial light at Admiralty Head was commissioned by the United States Lighthouse Board in 1861. By that time, commercial traffic in Puget Sound had greatly increased as trade with the Far East opened up.

­The lighthouse consisted of a 41-foot stone tower complete with a fourth-order Fresnel lens. The station's light, which could be seen from about 15 miles away, was a welcome beacon to those coming in from the often rough Strait of Juan de Fuca.

During the Spanish-American War, the Army dismantled the original lighthouse to make room for Fort Casey, an installation designed to help protect Seattle in the event of attack.

A new lighthouse was built in 1903. It included a short, thick stone tower attached to a two-story Spanish stucco residence that was painted a bright zinc white. Because of the height of Admiralty Head on Whidbey Island, the light was actually about 120 feet above the water.

As Puget Sound shipping routes changed during the 1920s, there was less of a need for a lighthouse at Admiralty Head. Eventually, in 1927, the lighthouse was decommissioned, becoming, of all things, an officer's quarters for Fort Casey.

Today it is a museum and popular tourist attraction. The lighthouse was recently featured by the U.S. Postal Service in its set of ten lighthouse stamps.