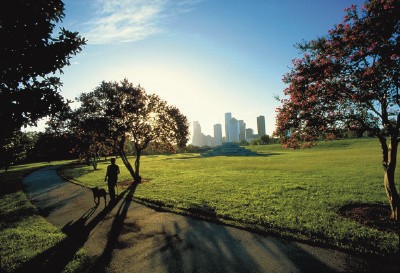 Visitors to Atlanta take in the sunny side of this cosmopolitan city.

Children are thrilled thrilled by tales of the Old West and inspired by visits to some the region's most advanced scientific locales. Plan a family vacation in Texas, Oklahoma, New Mexico, Arizona, or Nevada, and you'll have an opportunity to show your kids the Grand Canyon, old cowboy towns, or Space Center Houston. Arrive at the right time of year, and catch the Houston Livestock Show and Rodeo, participate in the Red Earth Native American Cultural Festival, or see the Albuquerque International Balloon Festival.

Explore the links, below, to find destinations your kids will love. We've included links to Mobil-rated family-friendly hotels and restaurants near each destination, so all you need to do is pack. Continue reading to find out more about places to take your kids in the Southwest.

Visit spider rock and explore a wild and varied landscape.

Take a rafting trip along the Colorado River for an up-close view from the depths of the Grand Canyon.

Offering hikers a uniquely lush experience in an otherwise dry area, Sabino Canyon is a fascinating landscape to explore.

Frank Lloyd Wright's architectural school draws students who explore his style and tourists who gaze on his work.

The Navajo Nation's landmark arch brings tourist who see beauty - and mystique - in it.

Craters of the Moon National Monument and Preserve

Lava shaped the unearthly landscape at Craters of the Moon National Monument and Preserve.

Hells Canyon of the Snake River

Mimicking the profile of a woodsman's saw, this mountain in central Idaho cuts an unexpected line in the landscape.

River Rafting on the Salmon River

After mid-July, River Rafting on the Salmon River gets mild enough for little kids.

Winter sports like skiing are popular at the scenic Sawtooth National Forest.

See the prairie field known as Custer's Last Stand, and learn about its history.

Museum of the Rockies

Find out about the ancient history of the Rockies at this amazing look into the region's prehistoric finds.

From over-the-top themed hotels, attractions, and shopping, families can have a lively outing in Las Vegas.

Not far from the trappings of Las Vegas, Pyramid Lake delivers a dash of solemnity in the Nevada wilderness.

Hot air balloons take to the sky at the Albuquerque International Balloon Fiesta.

Take a self-guided or ranger-led tour through the spectacular underground Carlsbad Caverns.

With settlement of the land came the establishment of new churches and mission. These surviving structures tell the story of faith in the region.

Drawing tourist who are looking for an out-of-this-world experience, Roswell is a destination for conspiracy theorists and the curious.

Museums with an eye for kids, as well as local culinary delights, top the list of what kids like about Santa Fe.

The oldest continuously occupied structure on the continent, dating back to A.D. 100, Taos Pueblo is an interesting look into history.

Kids can be cowboys at the National Cowboy & Western Heritage Museum in Oklahoma City.

Remembering those who suffered and died, this memorial is a sobering look at the tragedy and a message of hope for the future.

Celebrating one of America's greatest folk singers, this festival attracts acts and fans who love the genre.

Galveston's Sandcastle Competition, hosted by the American Institute of Architects is amazing.

In early May, Houstonians take to the streets for Everyone's Art Car Parade and Festival.

For ten days in April, more than 100 events are held throughout the city to celebrate Fiesta San Antonio.

Cowboys covet a chance to wrastle, rope, and ride at the Houston Livestock Show and Rodeo.

The Rio Grande, Devils and Pecos rivers join here, creating a source of beauty and a nature.

Kids kick up the sand on 80 miles of the Padre Island National Seashore, a natural playground.

This courthouse in a small town in West Texas dominates the skyline.

A melting pot of a city, San Antonio is host to a wide array of destinations and festivals, particularly along its river.

About 175 miles west of Houston, the Schlitterbahn Waterpark Resort is high-tech water fun.

Interactive exhibits at Space Center Houston allow you to touch a moon rock and dock a space shuttle.

Shake the dust of Texas off your boots, and head to the Rockies for the fresh, cool mountain air. Continue to the next page to read about planning a family vacation in the Rockies.