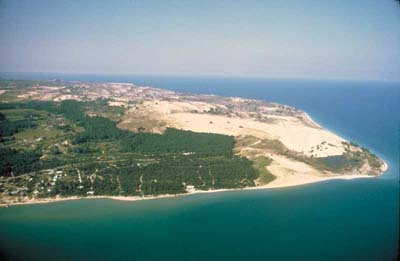 Sleeping Bear Dunes is one of Michigan's best-kept secrets.

Family vacations to the Midwest -- Ohio, Michigan, Indiana, Illinois, Wisconsin, Minnesota, Iowa, Missouri, Kansas, Nebraska, and both Dakota's -- entice with destinations like Cedar Point in Ohio, home to the world's tallest, fastest rollercoasters, and Conner Prairie in Indiana, one of the nation's most calm natural landscapes.

Seek all-out-exciting trip or a quiet weekend by visiting the links below, and find Mobil-rated family-friendly hotels and restaurants that will help you plan your trip in advance.

The Art Institute of Chicago

Kids head directly for the armor or miniature collections at the Art Institute of Chicago.

Chicago's Blues Festival celebrates the genre with a festival in June that spotlights the region's legendary performers and songs.

Films for -- and sometimes by -- children are celebrated in a lively Chicago festival in October.

Those few who aren't interested in shopping on this legendary street can still be delighted by its architecture, entertainment, eateries and diversions.

Museum of Science and Industry

The giant Ferris wheel attracts kids to Navy Pier, activities and restaurants keep families there all day and night.

The Children's Museum of Indianapolis is a bright world of exploration.

Work the fields as they did in the 1800s at Conner Prairie, Indiana's living history museum.

In Santa Claus, Indiana, preschoolers have a special place to play at Holiday World.

Indianapolis 500 and the Finish Line 500 Festival

The days leading up to Memorial Day Weekend mark the Indianapolis 500 and the Finish Line 500 Festival.

Visit the Amana Colonies, one of the most successful communal colonies in American history.

The bridges that crisscross the waters of Madison County draw visitors who seek romance.

Boot Hill Museum in Dodge City shows kids what Front Street was like in 1876, a rough-and-tumble tour of the Old West.

A visit to the Oz Museum is like stepping into the story, with witches, flying monkeys, and munchkin memorabilia.

It's Christmas all year long in Frankenmuth, Michigan, and families arrive for a dose of holiday cheer and fried chicken dinners.

Michigan's Grand Hotel on Mackinac Island is a charming masterpiece of old-fashioned luxury.

Holland, Michigan, pays tribute to its Dutch ancestry with a tulip festival held in the shadows of its picturesque windmills.

The Children's Theater Company in Minneapolis presents classics as well as forward-thinking works.

A gigantic mall with roller coasters, the Mall of America features a four-story Lego play area.

The Minneapolis Sculpture Garden is the largest urban sculpture garden in the country.

Button up their coats and get the kids out at the St. Paul Winter Carnival, a celebration in the city streets.

From the Gateway Arch's observation area, see the gateway to the Old West.

Kansas City's Hallmark Cards invites children into Kaleidoscope to create in a world developed just for them.

In St. Louis, kids are encouraged to play in this unusual Victorian house-made-museum called the Magic House.

Kids get up close to animals at the St. Louis Zoo, an imaginative place thoughtfully designed with kids in mind.

Its rising spire can be seen from the Oregon Trail and it also serves as the place where the plains give way to the Rockies.

Standing out as a landmark in the landscape, Chimney Rock has long oriented travelers.

A glass dome and a glass tunnel allow visitors at Omaha's Henry Doorly Zoo to walk into animal habitats.

Visit this authentic fort on the American frontier that was once the most important stop on the Northern Plains.

Stand in two countries at once in a garden that celebrates peace between the U.S. and Canada.

Bismark's tallest building is an Art Deco gem that stands out in the town and on the prairie.

An old train station comes to life as a museum center, where kids can explore science and fun.

In Ohio, the National Underground Railroad Freedom Center tells the story of the road to freedom.

In August, fans descend on Canton, Ohio, to revel at the Pro Football Hall of Fame Festival.

Rock and Roll Hall of Fame and Museum

Ancient people formed this snake into the land, and visitors arrive to wonder at its origins.

Begun in 1948, the Crazy Horse Memorial is a nine-story sculpture being carved into the Black Hills.

Kids can participate in a dig where more than fifty mammoth skeletons have been found.

More than 5,700 feet tall, Mount Rushmore is stunning to witness by day, and at its nightly lighting ceremony.

The little town of Sturgis throws a big party each year, welcoming revelers to its streets to shop, play, and celebrate.

Visitors to Wind Cave National Park come to see - and hear - one of the world's longest and most complex cave systems.

In northern Wisconsin, this group of 21 islands is a summertime ritual for visitors who arrive to explore nature and play.

Ornate, roomy, and a bit fascinating, the Captain Frederick Pabst Mansion in Milwaukee reflects a Flemish style and gives insight to the man behind the brand.

Tour, and of course taste, during the Jelly Belly Warehouse Tour in Pleasant Prairie, Wisconsin.

To fans, it's not just a stadium, it's an experience. Visit the hallowed stomping grounds of the Packers and find out more about Wisconsin's beloved team.

The Wisconsin Dells lures families with more than a dozen waterparks and many attractions.

Northern Wisconsin's summers are short, so families take advantage of every free moment at destinations like the Wisconsin Dells. During the winter, Midwesterners look for destinations in the Southwest, where warm skies and dry air make for a relaxing family vacation. Continue to the next page to find out more about family vacations in the Southwest.