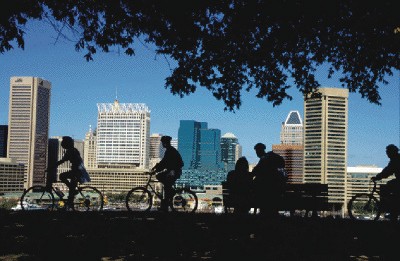 ©2007 GBCVB Cyclists exploring the shores of the East Coast.

Family vacations in the Mid-Atlantic states can be busy, exciting trips through cities via planes, trains and automobiles. The links below will help you plan a trip to New York, New Jersey, Pennsylvania, Delaware, Maryland, and Washington, D.C.

Visit some of the region's most sought-after destinations such as New York City, the International Spy Museum in Washington, D.C., Annapolis, Maryland, or even the Crayola Factory in Pennsylvania, or plan ahead to make sure you've got just the right hotel room for the Macy's Thanksgiving Day Parade in New York, or the Fourth of July celebrations in Washington, D.C.

Fairies occupy the grounds of Delaware's Winterthur Gardens, an imaginative place to take your children.

Delaware's village of Lewes offers a well-rounded set of seaside activities for the littlest toddlers to the choosiest teens.

The nautical converge on Annapolis to try Maryland's waters or to visit the Naval Academy.

Wild ponies roam this sleepy island. Well worth the drive for the many opportunities to explore scenic and natural beauty, Assateague Island is a quiet destination.

The final destination of the B&O line is now a museum that celebrates all things rail.

Plan a full day to explore the variety of attractions available by land or sea at Baltimore's Inner Harbor.

America's largest estuary. Spanned by a 23-mile bridge/tunnel as well as the Chesapeake Bridge, this shallow bay is an important and beautiful natural resource.

From the late 1800s, this boardwalk has been welcoming visitors who arrive to play the casinos and troll the beaches.

The nation's oldest seaside resort, Cape May reflects the architectural sensibilities of the Victorian era, and activities of days gone by.

The American Museum of Natural History

The American Museum of Natural History in New York features eye-popping exhibits for kids of all ages.

The Bronx Zoo fascinates children and adults with exhibits that are realistic, educational and fun.

New York's Central Park features a zoo and special playgrounds for kids, along with entertainment throughout the year.

With its stainless-steel crown, Art Deco spikes, triangular windows and gargoyles, the sheer romance of the Chrysler building's facade is worth lugging a pair of binoculars around New York.

View New York City from its waters on a Circle Line Tour, a relaxing, informative way to sightsee.

Americana down to the baseball and apple pie, Cooperstown, New York, is a must-see for fans of the game - and history.

The Empire State Building's view of New York and beyond can stretch for 80 miles on a clear day.

Guides walk visitors through this solemn site, remembering the events of September 11th, 2001 and looking to the future.

Usher the holiday season in at the Macy's Thanksgiving Day Parade in New York City.

The Metropolitan Museum of Art

Visit New York's Metropolitan Museum of Art with a kid's eye and you'll be delighted with what you see.

The most action-packed city blocks in New York wow out-of-towners with the constant buzz of commerce.

Statue of Liberty and Ellis Island

Symbolizing freedom and hope, the Statue of Liberty and Ellis Island continue to inspire.

Massive in size and scope, the United Nations complex is host to a complexity of nations and politics

Take a colorful tour of the Binney & Smith Crayola Factory in Easton, Pennsylvania.

Frank Lloyd Wright's most-admired work is Fallingwater, the home that seemingly floats over a stream in Pennsylvania.

The gigantic human heart at the Franklin Institute of Science is an oversized science lesson.

Punxsutawney Phil makes an appearance in Punxsutawney to mark the end - or the near-end of - winter.

Sweet rides at Hersheypark amusement park round out this dream trip to the chocolate factory.

Independence Hall and the Liberty Bell are two of Philadelphia's most-visited destinations.

A New Year's Day tradition in Philadelphia, the Mummers Parade (and museum) delivers a long tradition of humor.

Show your children a different world in Pennsylvania Dutch Country, a peaceful tour through Amish communities.

Planned by William Penn in 1682, and its now an artsy neighborhood - as well as the proud home of Elfreth's Alley, the oldest residential street in America.

To get a good view of Pittsburgh's three rivers, take the Duquesne Incline.

Let your kids roam the Pennsylvania's Please Touch Museum, where they get hands-on time with everything.

Solders from every war the United States has fought are buried at Arlington. It is also the site of President John F. Kennedy's grave.

Plan ahead to make your Fourth of July Festivities in Washington, D.C. memorable.

And entire vacation can be planned around the museums, events, and attractions on our National Mall in Washington, D.C.

The National Air and Space Museum in Washington, D.C. explores the thrill of flight.

Bureau of Engraving and Printing

All things monetary are scrutinized at the Bureau of Engraving and Printing in Washington, D.C.

Gazing out at the Reflecting Pool and to the Washington Monument and the National Mall, Abraham Lincoln's massive figure is an imposing reminder of what he accomplished for our nation.

For a few fleeing weeks in March and April the National Cherry Blossom Festival takes over Washington, D.C.

National Museum of the American Indian

In Washington, D.C., the National Museum of the American Indian is a new addition.

Early birds arrive at 6 a.m. at the National Zoo in Washington, D.C., to see the animals as they start their day.

Supreme Court of the United States

The highest court in the nation is fronted by eight rows of pillars that hold up the motto, "Equal Justice Under Law."

Devoted to documenting, studying and interpreting the Holocaust, the museum is also a memorial to the Holocaust's six million victims.

Pennsylvania Avenue's best-known residence once maintained an open-door policy. These days, it's a bit more difficult to get in, but don't' pass an opportunity to see what you can when you're in town.

From the Mid-Atlantic, it's easy to sweet through New England as well. Continue reading to find more family vacation destinations in New England states including Maine, New Hampshire, Vermont, Massachusetts, and Connecticut.