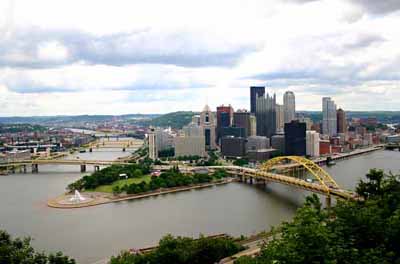 People call Pittsburgh the Steel City: The name dates back to the early 19th century when the steel industry ruled the city. Back then, white-collar workers brought an extra shirt or blouse to work because a black ring would form inside their collars by lunchtime. In the early 20th century, streetlamps burned all day so residents could see through the smoke. Today, the air is clear, and the smoke and mills are mostly gone.

When in Pittsburgh, one of the best ways to see the city is by taking the Duquesne Incline, which, since 1877, has provided public transportation to the top of Mount Washington, a steep hill on the city's south side. Take the incline at night and go to the observation deck overlooking downtown Pittsburgh's Golden Triangle. Fifteen major bridges span the waters of the Allegheny and Monongahela rivers as they flow together to become the Ohio River. The Renaissance City sparkles like a river of stars.

You'll not only be rewarded by the view, but by having landed in the middle of Pittsburgh's Restaurant Row. Opposite Mount Washington, going north across the rivers, is the Andy Warhol Museum, the Carnegie Science Center, PNC Park, and Heinz Field. While you're on the north side of the rivers, check out the National Aviary. It's a warm refuge on a chilly Pittsburgh day.