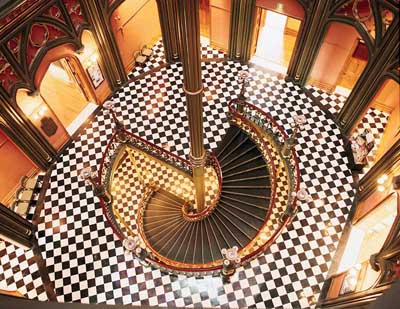 © Baton Rouge Area Convention and Visitors Bureau. The Old State Capitol is one of the premier examples of Gothic-revival architecture in the United States.

Baton Rouge, Louisiana, surprises visitors with not one but two amazing state capitols. Today the Old State Capitol is a museum. Its Gothic-revival architecture is impressive: The building resembles a shiny white medieval castle. The interior is striking as well: An elaborate central staircase of broad marble steps descends under a kaleidoscopic stained glass ceiling. However, most of the original furnishings are now gone. Instead, tour the re-creations of old press and government offices and interactive exhibits such as a podium with a TelePrompTer that rolls famous Louisiana speeches.

It is notable that Huey Long and Mark Twain -- who surely would have agreed on little else -- each despised the building and called it ugly. Long disliked the Old State Capitol enough that he made building a new one part of his first campaign for governor in 1928. Luckily for visitors, the new Art Deco State Capitol is almost as much of an architectural curio as the old one.

At 34 stories and 450 feet high, the capitol is the largest U.S. state capitol and the tallest building in Louisiana. The dominating limestone structure defines the Baton Rouge skyline. In 1935, Long was assassinated in the capitol and is now buried in the center of the Capitol Gardens. Some say the nicks in the walls of the capitol hallway are from the bullets that were fired.