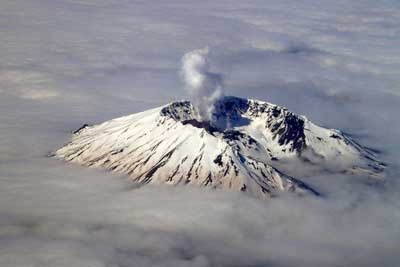 Washington's Mount St. Helens is perhaps the most famous volcano in the United States. It earned its reputation the morning of May 18, 1980. The mountain shook, and its north face cascaded into an avalanche, creating a towering mushroom column of ash that blotted out the sun and drifted into Idaho and beyond. The eruption continued through the evening, lasting about nine hours. Two years later, President Ronald Reagan signed a bill making Mount St. Helens a National Volcanic Monument, allowing the ecosystem to respond naturally to the eruption.

Mount St. Helens National Volcanic Monument attracts scientists who use it as a living laboratory as well as hikers and other outdoors buffs. The volcano is part of the Cascade Range, which also includes Mount Rainier and Lassen Peak. In recent years, Mount St. Helens has shown new signs of activity, with a lava dome growing under the crater left from the 1980 eruption.

On the next page, learn about the Glass industry in Washington State.