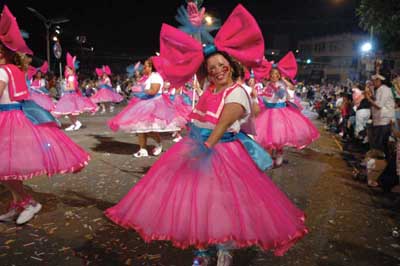 This big ol' Texas house party is held every April. It's a ten-day event that celebrates San Antonio's diverse culture and recognizes the heroes of the Alamo and the Battle of San Jacinto. Numerous ethnic groups have contributed to the rich culture and history of Texas, and just about every one of them is honored during the fiesta. More than 100 events are held throughout the city, including three distinctly different parades, each one worth seeing.

The first Battle of Flowers Parade took place in the late 19th century when a group of women in decorated horse-drawn carriages paraded in front of the Alamo and pelted each other with flower blossoms. That event was the beginning of the Fiesta, which continues today. You can still see costumed ladies tossing petals during the parade, which also features flower-covered floats, horse-drawn carriages, and high school and military bands from all over the United States.

The floats in the Texas Cavaliers River Parade really do float -- down the San Antonio River -- in this unusual water parade. The Famous Fiesta Flambeau Night Parade is a glowing splendor that features illuminated floats and marching bands performing precision drills. Vendors sell a variety of foods along each parade route -- be sure to try the famous San Antonio "raspas" (snow cones) and delicious roasted sweet corn.

Music is a big part of the celebration, and mariachi, nortea, and German polka bands play throughout the festival. During four nights of the fiesta mariachi groups perform on the river as they drift along the Paseo Del Rio on colorful floats.

Children's events are seamlessly woven into the fiesta: A Taste of New Orleans features food and music from the Big Easy along with a children's play area. One day is devoted to a Children's Festival with live entertainment, interactive games, face painting, clowns, storytelling, miniature golf, and wildlife exhibits. Another family favorite, the Fiesta Pooch Parade, features canines of all types decked out in fiesta garb.

Fiesta Fantasies is a staple of the festival. It takes place in Market Square and continues through all ten days of the event. People come to dine on local specialties and watch dancers and music performances of many different genres, including tejano, jazz, and country-western, on any one of the six stages. The final event of the night features nonstop live entertainment, a children's carnival, aerial acrobatics, and military pageantry. The fiesta's grand finale is a fireworks display.

If marine animals pique your interest, check out Sea World in San Antonio, featured on the next page. It's the world's largest water park and is home to Shamu, the killer whale.

Hours of Operation: Starts the third Friday in April and continues through the fourth week