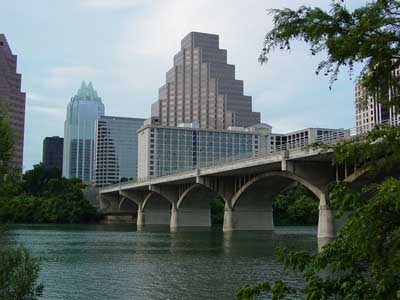 Bat-viewing veterans debate the best place to see the 1.5 million Mexican free-tailed bats that blast out of their daytime home beneath Austin's Congress Avenue Bridge every evening. Some think it's best to stand or even lie down on the riverbank and look up as the sky darkens with the largest urban bat colony in North America. Others like to stand on the bridge for the panoramic view. Many tourists take to the water on Town Lake and reserve a place on a bat-viewing boat tour to watch the event, which can take as long as 45 minutes.

The bats began congregating in Austin in the 1980s after the bridge underwent structural changes. The construction provided just the right kind of crevices for them to hang out in (literally) during the day. Austinites reacted with fear and loathing until they learned that the bats consume between 10 and 15 tons of insects -- including mosquitoes -- each night. The bats begin their migration to Austin in early March and give birth to their pups in June. They spend the summer in Austin and head south again in November.

Best known for being the home of the Alamo, San Antonio hosts several family-friendly attractions. Learn more about activities for the whole family in San Antonio on the next page.