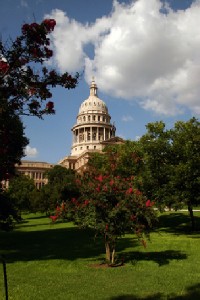 The Texas State Capitol and Capitol Grounds are the most popular tourist attractions in the capital of Texas.

Austin stands out from most Texan metropolises. With more than 650,000 people, this is no small town (though it's certainly much smaller than Dallas and Houston).

Austin has a Bohemian aura, due in part to the University of Texas campus. And politics prevail here: Austin is Texas's capital city, and its capitol building is the largest in the country. The aroma of barbecue and Tex-Mex cuisine hangs in the air, and the nightclub-lined Sixth Street is one of the best spots for live music in the entire world.

Then there are the 1.5 million Mexican free-tailed bats that hang from the downtown Congress Avenue Bridge, which spans the Colorado River. Crowds gather from March through November to watch them emerge en masse at sunset. It's hard to capture the city's laid-back vibe in words. Maybe the city's unofficial slogan, seen on T-shirts and Volkswagen bumpers all over town, says it best: "Keep Austin Weird."