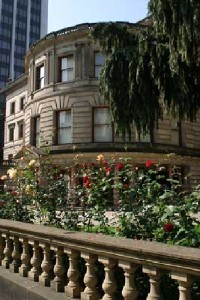 Pioneer Courthouse Square is decorated with colorful swashes and greenery.

Pioneer Courthouse Square in Portland, Oregon, is nicknamed "Portland's Living Room." And like every good living room, the square offers entertainment and plenty of seating space. The two amphitheaters host more than 300 events each year, including concerts and cultural festivals.

Those with a flare for art enjoy the fountain, pillars, sculptures, and an astounding Weather Machine, an innovative creation with three symbols that each represent an element of Portland's climate. There's even a signpost that shows how far it is to places as distant as Red Square in Russia.

The square has taken on many forms throughout history. A shoemaker named Elijah Hill bought the block for $24 and a pair of boots in 1849, two years before the city of Portland was officially established. James Field sold it to the fledgling Portland School Board less than a decade later, and they built a schoolhouse on the spot. In 1883, the schoolhouse was relocated to make way for the ritzy Portland Hotel, which remained open until 1951.

The spot became a two-level parking structure for about 30 years, until the city acquired the land and transformed it into one of the nation's most vibrant public commons. Today, the square attracts millions of people each year to its special events, including the annual midsummer Festival of Flowers.­

Continue to the next page to learn about Mount Hood in Oregon.