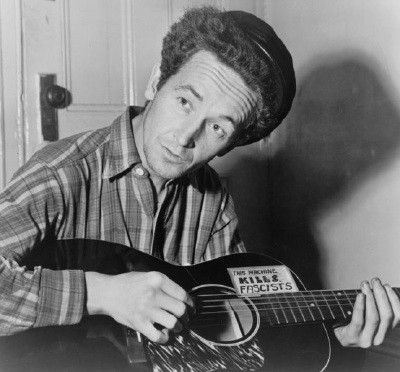 Arlo and Abe Guthrie, son and grandson of folk legend Woody Guthrie, performed at the 2004 festival.

Bob Dylan's self-described "last hero," Woody Guthrie, is an American icon, not only as a musician but also as a champion of the working class. While Guthrie's most recognizable musical legacy is probably "This Land Is Your Land," he built a national following with protest songs that focused on class inequality. He became known as a folk musician during the 1930s in California, and his popularity broadened in 1940 when he adopted New York City as his new home.

After touring, recording albums, and writing his autobiography in the early '40s, Guthrie's health began to deteriorate due to Huntington's Chorea. He was institutionalized in 1954 and was in and out of hospital treatment centers until his 1967 passing at the age of 55. Woody's legacy is celebrated the week of his birthday, July 14, in his hometown of Okemah, Oklahoma.

The five-day festival is marked by performances by dozens of top-notch folk musicians (regional favorites and nationally recognized touring musicians), a songwriting contest, and a deep reverence for the late, great Woody Guthrie.

Continue to the next page for details on family vacations to Oklahoma City National Memorial.

Hours of Operation: Week of July 14